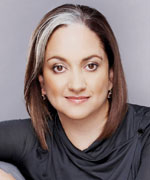 Ferial Haffajee is a South African editor and journalist. She is currently associate editor at the Daily Maverick where she covers the Presidency, the commissions of inquiry into state capture and general economics and finance breaking news. Previously, Ferial was editor-in-chief at the Mail & Guardian and City Press, where teams working with her won numerous investigative journalism awards. She is a regular analyst and commentator on radio, television and elsewhere.

Ferial is a member of the Aspen Global Leadership Network and a member of the Africa Leadership Institute fellowship. She is on the board of the Open Society’s Programme for Independent Journalism. She has won numerous awards for journalism and for her support of media freedom including a Committee for the Projection of Journalism’s International Press Freedom Hero award in 2015 andthe Naspers Phil Weber award in 2013 – the global company’s highest internal honour.