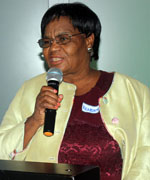 After a long career in Gender and Media activism, Keabonye Ntsabane, fondly known as KB, entered local politics in 2014. In 2018, she won the primary elections against four men from the BDP and is now one of five women, out of 11, in her council. Ntsabane became a gender activist working in the area of women in media and the issue that kept on coming up was ‘why can’t women make it to decision-making positions, what are the obstacles to women participating in politics?’ It was certainly possible, but not an easy road. Through her work with Gender Links and Botswana Association of Local Authorities (BALA) on gender mainstreaming in councils, the work is ongoing. Gender focal points in councils now take responsibility for the gender activities and also co-fund these with CSOs and sharing of responsibilities, for example 16 days has become an important even on the calendar.

Ntsabane is passionate about gender issues, which she will push in council. She is particularly passionate about GBV, which she established a trust to address. She understands the importance educating people on women in decision making and power sharing to encourage women to stand for election. In 2018 Ntsabane was recognised with an Award from the President, nominated by the community because of the good work that she has done for the country. She was also recognised as a hero in the pension fund calendar. She says “I will die a happy person because I have done something for my country”.