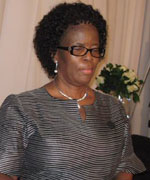 South Africa’s ambassador to Cuba, a veteran freedom fighter and gender activist, Thenjiwe is former Deputy Secretary General of the African National Congress; former Chair of the Commission on Gender Equality and former commander of MK, the ANC’s military wing during the struggle for South Africa’s liberation. She recently completed her master’s dissertation on the impact of, and constraints faced by women parliamentarians in the new South Africa. Highly regarded in gender circles, Thenjiwe writes and speaks regularly on gender issues. Her framework for analysing women in decision- making, found in the book “Redefining Politics” has become a frame of reference in gender training in Southern Africa. Thenjiwe brings to GL a host of practical experience of dealing with the mainstream media, as well as enormous leadership and analytical skills.