Board of Directors Alice Gough 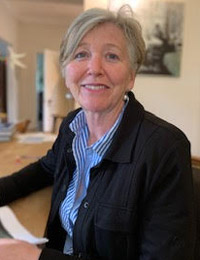 Alice Gough lived in South Africa for 4 years until 2015 and in India for 4 years before that. In both countries Alice deep interest was in the political, social, cultural and economic struggles, current and historical, and the issues surrounding and underlying the birth and development of such ‘new’ countries. Amongst all the difficulties that these societies face, Alice realised how women had a particularly hard time achieving equality and economic independence. This impacts profoundly on their work, family and personal lives. In South Africa Alice was involved in two literacy projects in Diepsloot, and became all too aware of the likelihood of girls and young women leaving education, or having to compromise in their ability to learn, through poverty, by having to care for others at home or by sexual violence and/or pregnancy. In her own home Alice supported her domestic worker through her diagnosis of HIV, her care of her small children, her marriage breakdown, the ill health of her wider family members and her ambitions to move away from domestic service into a more reliable and less dependent employment. Her story was symptomatic of the way that countless women live in Southern Africa, buffeted by economic woes, ill health, poor education and gender-based violence.

In India Alice was lucky enough to work with a therapist highly skilled in family and couples’ counselling, and together they set up a thriving not-for-profit practice, really trying to support families and couples negotiate changing cultural norms and expectations.

After leaving university Alice worked in Human Resources for about 6 years, both in the UK and USA, and was deeply interested in how people perform in organisations. More fascinated, ultimately, in peoples individual stories Alice returned to university to study academic psychology and then spent a further 3 years training to be a counsellor. She worked with couples, individuals and the profoundly psychiatrically ill, in particular those with a diagnosis of borderline personality disorder. Although not specifically focused on women’s mental health, Alice is a passionate believer in the need for everyone to be able to work and live to their full potential whether that be in paid employment, the voluntary sector or within the family and home. Currently Alice lives in the UK where she is focusing on supporting worthwhile organisations that push for societal change through policy and practice.