Board of Directors Lydia Muso 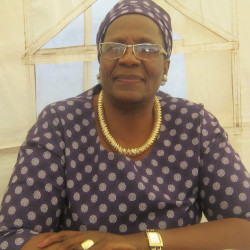 Lydia Muso is the founder of Lesotho child counseling Unit (LCCU) a well-known NGO that provides Psycho Social Support (PSS) to traumatized children in the entire country. Before devoting herself to LCCU, she worked as a nurse at one of the hospitals in Gothenburg Sweden, where she gained love and much experience in caring for children in difficult circumstances. She moved to Sweden early in 1980 after finishing her high school and returned to Lesotho in 1990 January. On her arrival back in Lesotho Lydia worked with a treatment center for drug and alcohol addicts as Occupational Therapists for 4 years. She then got sponsorship to study as a Social Worker in Zimbabwe in 1996.

On her way back from school, she excelled and became known for protecting children who lived and survived in the streets. In 2001 she found her own NGO called LCCU. She did a documentary film with Prince Harry and received contributions to build LCCU. She received 12 awards for the best Community Worker from local radio stations and other local business entities. To mention but a few; Vodacom on “Hall of Fame” for the best Child Protector Activist, American Embassy “A Woman of Courage,” as a “Women Pioneer in the field of courage” from the 1st woman Pioneers Summit in 2014, held by Intelligent Transfer Centre in Johannesburg, “Best Community Award” from EDCON Shops in South Africa in 2004.

She is at the present moment staying and caring for traumatized children in her own house. The children are referred by the ministry of social development, police and chiefs. She has spent 32 years in child Protection forums.