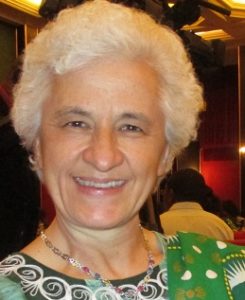 Her ability to deal sensitively in multi-cultural environments is underpinned by a rich and diverse background. A South African born in Zimbabwe, Colleen is married to a Ghanaian and they have two daughters one of whom lives in Mozambique; the other is married to a Kenyan of Somali origin. Colleen has family ties, and has travelled and worked extensively in East, West and Southern Africa. She went to school in Zimbabwe and Waterford/Kamhlaba, a United World College in Eswatini, before obtaining a bachelors’ degree in International Relations at Princeton University and Masters’ degree in Journalism from Columbia University in New York in 1982.

Colleen began her career as a journalist specialising in gender and development with Inter Press Service Development News Agency in Harare; correspondent for South Magazine and Africa Editor of the New Delhi-based Women’s Feature Service. She joined the Commonwealth Secretariat as a senior researcher on the Africa desk in 1991, and later served as Chief Programme Officer of the Commonwealth Observer Mission to South Africa. Following South Africa’s first democratic elections in 1994, Colleen became an advisor on gender and institutional development to the Commonwealth Fund for Technical Assistance special programme of assistance to South Africa, where she helped to design the country’s National Gender Machinery. She subsequently served as founding CEO of the South African Commission on Gender Equality, before founding Gender Links.

A visionary executive with exceptional strategic and analytical skills, Colleen holds a certificate in executive management from the London Business School; has received awards from the Newswomen’s Club of New York; Mail and Guardian newspaper; South Africa’s Media and CEO magazines. In 2007 the University of Johannesburg awarded Colleen honorary membership of the Golden Key International Honour Society that recognises excellence in academia and public service. In 2019, Colleen received a Ford Foundation Fellowship to participate in the Leadership in Transition programme hosted by the Lily School of Philanthropy at the University of Indiana, together with other NGO leaders from the African continent, as part of GL’s succession planning.

An example of Colleen’s ability to facilitate and coordinate complex projects with multiple stakeholders and understanding of program design and execution is the sustained campaign, led by GL during her tenure, for the adoption of the SADC Protocol on Gender and Development following the Beijing Plus Ten review in 2005. This led to over 40 Women’s Rights Organisations (WRO) lobbying for the adoption of this unique instrument that brings together all global and regional instruments for gender equality into one legally binding protocol with targets, timeframes, and a Monitoring and Evaluation framework. GL hosts the secretariat of the Southern African Gender Protocol Alliance that has gone on to lobby for the updating of the Protocol in line with the Sustainable Development Goals, using this opportunity to advocate for more progressive language on Sexual Reproductive Health and Rights and launching the #VoiceandChoice campaign.

GL has cascaded the Protocol to 450 councils that have elected to join the Centres of Excellence (COE) for Gender in Local Government programme in ten countries. Each year GL coordinates SADC Protocol@Work summits bringing together WRO, local authorities, community organisations, and governments to share good practices on improving the lives of women and girls. These complex events demonstrate Colleen’s ability to use critical judgment and seek guidance on complex issues. This has led to the many accolades that GL has earned, including that of a “small organisation with large footprints”

Colleen’s ability to document, synthesize and present findings is reflected in the numerous major research projects, reports and books, and regular opinion pieces in the mainstream and on social media. In 2021, she edited International Idea’s inaugural Women’s Political Participation in Africa Barometer. She has championed and edited the annual SADC Gender Protocol Barometer since 2009. The #VoiceandChoiceBarometer includes chapters on health, HIV and AIDS. Since 2018 this has expanded to include several other SRHR topics, such as maternal health and safe abortion. Through this research, editing and writing, Colleen has an excellent working knowledge of the health sector and other development sectors in the African continent.

A strategic problem-solver and change manager who has advised several international agencies on gender strategy, Colleen has led all the major gender audits and mainstreaming projects of GL Advisory Services. Clients include the African Union, African Development Bank, and SADC Secretariat, Diakonia (a global Swedish NGO) and several grantees in East and Southern Africa, as well as in Asia.

zones including conducting virtual training for the GL Training Institute. An example of this is the virtual learning and sharing workshop for WVL partners held virtually over one week across Africa in April 2021. Colleen is well qualified to lead the team that would support gender integration into the Africa programmes of the Bill and Melinda Gates Foundation.