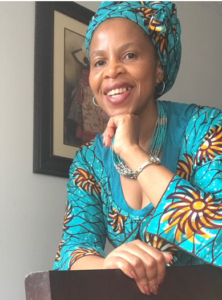 Khetsiwe Dlamini is a local, regional, and global gender specialist and thought leader who has straddled geographies and sectors to pursue a gender-equal world over three decades. She lives in Nairobi, Kenya, with her husband.

Born and bred Swazi, Khetsiwe started her career as a High School Teacher in Hlathikhulu, a rural town South of Eswatini where she comes from. It was then that the differences in the opportunities that boys and girls got struck her as illogical and limiting. This was how her quest for gender equality grew roots.

This pursuit took Khetsiwe to South Africa to further her studies. Khetsiwe studied women’s economic empowerment in business at master’s and doctorate levels whilst working full time, single parenting and transforming from a gender-based violence victim to a victor. Implementing evidence-based gender equality solutions within complex contexts across public and private sectors became something Khetsiwe was well known for over her nearly two-decade-long global career within the World Bank Group; after spending five years in the NGO sector focused on women’s empowerment.

Khetsiwe’s gender equality achievements resulted in her being appointed as the Chief of Staff for UN Women and concurrently the Strategic Partnership Director and the Senior Innovative Finance Advisor over the five years 2015-2020. Since then, Khetsiwe has started an African global gender lens and impact advisory firm which helps communities, companies, and countries unleash the power of women in addition to men for peace, prosperity, and a lasting planet.