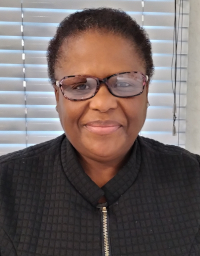 Naledi Masipa is a teacher by profession with Secondary Teachers Diploma and Further Diploma in Education Management.  She left teaching in 2002 and joined Department of Public Works as Human Resources Officer. When the department joined other organisations on Transformational issues, she was requested to assist on Gender issues. In 2003 she was given an opportunity to go to Status of Women in Canada for Gender –  Based Analysis Policy Training. Coming back from Canada with more knowledge on issues of gender, she was then eager to work at community level.

In 2005 she joined Capricorn District Municipality as a Gender Coordinator. She continued to enhance her knowledge by obtaining certificates on Gender in Everyday Life (2008), Gender Mainstreaming (2009) and Gender as a Catalyst for change (2009) with Faculty of Humanity at the University of Pretoria.

In 2011 she saw a need to enrol on Counselling because she was more involved with women who were experiencing trauma or severe life stressor. She would come in because of her great passion in bringing healing to people who have been through traumatic or stressful experience. She is also a marriage and difficult children Counsellor. As we know life can throw a person many ups and downs over the course of their life. One should have a particular person who listens and provides insight to help navigate rough patches and big decisions and Naledi is one, for most of the women, children and families.

She helps people including children, adults & families to find healthy perceptions of themselves and strengthen their relations.

In 2011 – 2016 she was recognised as a Driver of Change for Gender Mainstreaming in Local Government by Gender Links. She was assisting SALGA Limpopo Province by sharing her knowledge in gender mainstreaming. That’s where she was popularising the Centre of Excellence model in the province targeting Councillors.

Through her efforts, expertise and innovations the following just to mention the few, the district was recognised as the best practice in gender mainstreaming in the province and also in the SADC Region:

She took early retirement form the Municipality at the end of 2020 and joined Gender Links on the 1ST May 2021.