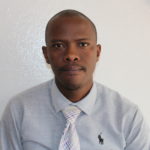 Thando was born and grew up in the town of Manzini in Swaziland. He studied and obtained his Diploma in Law at the University of Swaziland. Growing from a family of human rights activists, he joined Gender Links as an intern in the year 2012.

From general office administration and governance work in the Swaziland office. He was transferred to GL head office (Johannesburg) in 2014 where he held the position of Communications Officer. Among other communications work Thando has self-taught and developed new skills in graphic design and video production.

He held position of Communications Officer until January 2018 wherein he was redeployed back to Eswatini as a Programme Officer. He now holds the Eswatini flag high since his return making a huge Eswatini GL ‘noise’ once again, taking the #SwaziSocialMedia platforms by storm.