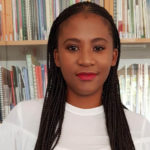 Thato Phakela holds a Bachelors of Arts Degree in Communications Science from the University of South Africa. During her academic career she volunteered as a news writer and reporter at Lesotho Broadcast Services. She then moved to print media and started working as a journalist for Public Eye Newspaper.

She first joined Gender Links in 2011 as Gender and Media Diversity Intern. This was after completing a diploma in Mass Communications at the Institute of Extra Mural Studies (EIMS). She has worked for organisations such as Association for Water and Rural Development as a Communications Officer.