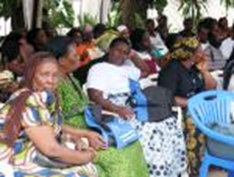 Up to 70% of Africa’s population of 1 billion people subsists on the land, and 70% of its labour force is employed in agriculture. Most African economies rely on agriculture – for instance, the agricultural economies of Ghana and Nigeria constitute 35% of their gross national product.

Many African women cultivate the land, plant, tend, harvest and prepare for consumption most of the food that comes from smallholdings. They grow food for household consumption as well as for local markets.

Yet in most African countries, women’s legal property ownership rights are not secure. Only 1% of women in Tanzania have legal land titles. In Zimbabwe, up to 20% of women have land titles, but despite this relatively higher number, “women rarely profit” from their land.

Traditionally, land in Africa was communally owned, which is not to say that all the land was available to anyone, but rather that different ethnic or familial agricultural and pastoralist communities owned and had rights to access and use land.Patriarchal land ownership systems generally discriminated against women.