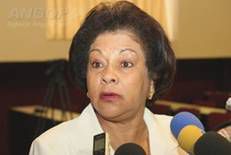 Justice Minister Guilhermina Prata proposed the draft law to Angola’s parliament last year in November to curb clandestine abortions, which have caused the death of many young girls in the country.

Estimates show that at least 5.5 million unsafe abortions occur in Africa per year and about 40 % of the women die because of complications due to the unsafe nature of the pregnancy terminations.

But the Archbishop of the central city of Huambo, Jose Queiroz, condemned the proposed legislation in strong terms during the Episcopal Conference of Angola and Sao Tome and Principe in early January 2012.

“The legalisation of abortion in Angola represents the State’s lack of responsibility in its duties to battle poverty and support the Angolan woman, a constitutional obligation assigned to the authorities,” the archbishop told the press on the side-lines of the conference.

“Abortion is not a right for a woman to decide if a human being can or cannot live. Women are responsible for conceiving or not.”

Despite Angola being a signatory to the SADC Gender Protocol which calls for the development and implementation of policies and programmes that address the physical, mental, sexual and reproductive health needs of women the Bill might not stand a chance considering that 60% of the country’s 19 million people are Catholic.