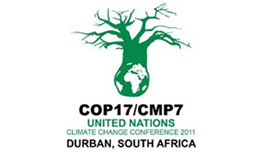 Cop 17 makes progress in preserving a better tomorrow, SADC gender and climate agenda under the spotlight

South Africa Minister of International Relations and Cooperation and President of the Durban (COP17/CMP7), Maite Nkoana-Mashabane said the conference made progress in ensuring a better future for all.

“We have taken crucial steps forward for the common good and the global citizenry today. I believe what we have achieved in Durban will play a central role in saving tomorrow, today ,”said Maite Nkoana -Mashabane.

Executive Secretary for UNFCC, Christiana Figures saluted all the countries that made the agreement. She said, “They have all laid aside some cherished objectives of their own to meet a common purpose-a long term solution to climate change. I sincerely thank the South African Presidency who steered through a long and intense conference to a historic agreement that has met all major issues.”

In Durban, governments decided to adopt a universal legal agreement on climate change as soon as possible, but not later than 2015. Work will begin on this immediately under a new group called the Ad Hoc Working Group on the Durban Platform for Enhanced Action.

Governments, including 38 industrialised countries, agreed a second commitment period of the Kyoto Protocol from January 2013. To achieve rapid clarity, Parties to this second period will turn their economy-wide targets into quantified emission limitation or reduction objectives and submit them for review by May 1, 2012.

“This is highly significant because the Kyoto Protocol accounting rules, mechanisms and markets all remain in action as effective tools to leverage global climate action as models to inform future agreements, “added Figueres.

It will be important to ensure that SADC leaders integrate the key outcomes of the COP17 into legal and policy frameworks to sustain the interventions. It is also a practical way for the sub-region to bring all the commitments home and translate them into the language that women and men in local communities can identify with as part of the forward-looking strategies.

Building on the momentum of COP 17 when for the first time gender has come up higher on the agendam, gender activists are pressing for SADC Ministers for Women’s Affairs/Gender to adopt the principle of an Addendum or amendments on gender, climate change, and disaster risk management to the SADC Protocol on Gender and Development. It will be an opportune time to bring in issues on food security and nutrition, water, sanitation and other basic needs. Currently the SADC Gender Protocol has a gap in that it does not have any provisions on gender and climate change.

The Southern Africa Gender Protocol Alliance coordinated by Gender Links has launched a petition campaign calling on SADC governments to adopt as matter of urgency, the principle of an Addendum or amendments to the Gender Protocol.

Comment on Cop 17 makes progress in preserving a better tomorrow, SADC gender and climate agenda under the spotlight Cancel reply