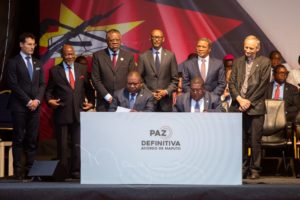 By: Graça Maria- Mozambique: August 6 was an important milestone for Mozambicans in the country’s final peacemaking process, with the signing of the 3rd Peace and Reconciliation Agreement, an act carried out by the President of the Republic, Filipe Nyusi and Renamo Leader Ossufo Momade.

Both representatives of the parties involved pledged not to let any internal or external factors give way to military conflict. Permanent dialogue is the greatest commitment of the two leaders. This agreement is signed 5 days after the signing of the cessation of hostilities agreement in Gorongosa. 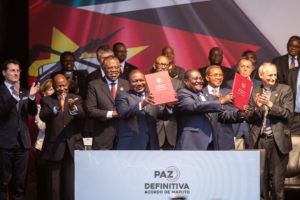 The signing of the peace agreement represents a turning point for Mozambicans who will be able to freely pursue the pursuit of economic and social progress and development, as well as the exploitation of the various resources available to the country.

A distinctive feature of this agreement, unlike 2 previous ones of 4 October 1992 and 5  September 2014, is that it contains the reconciliation component clearly stated in the agreements which also includes the social reintegration component just to benefit residual soldiers who have no educational qualifications or even age that do not allow them to integrate into the ranks of the police and / or National Defense.

The event, which took place in Peace Square, was witnessed by Joaquim Chissano, former president of Mozambique, Mirko Manzoni, contact group chairman, Dom Mateo Zuppi, from Sant’Egidio Community, Jakaya Kikwete, former Tanzanian president, Paul Kangamé , Rwandan President Edgar Lungu of Zambia, and Namibian and SADC President Hage Geingob.In representation of the distinct group present in the act, Mirko Manzoni, Swiss ambassador to Mozambique, chairman of the contact group and representative of the UN secretary general, commented on the peace agreement saying that “today is a truly historic day and the agreement will bring lasting peace.” to the Mozambican people. ”

It should be noted that this agreement would take place on the eve of the general elections to be held on 15 October this year, meaning that there will be room in terms of security and peace for all Mozambican people to actively join the electoral process.