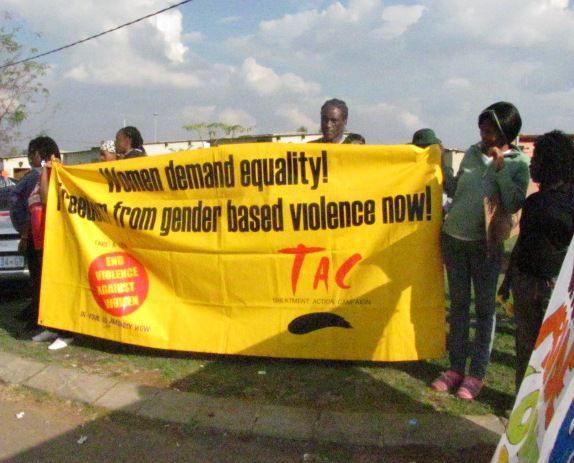 As the region moves towards halving gender based violence by 2015, reports on the ground tell a different story. Gender based violence continues to take gruesome turns and twists – child prostitution, human trafficking, passion crimes, hate crimes, the list is endless. In protest to hate crimes Gender Links recently joined the City of Ekurhuleni, church leaders, political parties, LGBTI groups and the community of Kwa-Thema at a day of prayer to support the family of Noxolo Nongwazi, a lesbian who was brutally raped and murdered last month. The purpose of the meeting was to raise awareness to the religious community and residents of Kwa-Thema on Gender Based Violence and its impact on communities. The event was attended by more than 200 hundred people including the Mayor of Ekurhuleni, Mondli Gungubele, who also gave the keynote address.

Continue reading for reaction from the South African government:

South Africa killing of lesbian “a hate crime”
The South African government is finally taking action to end homophobic violence. The justice and constitutional ministry recently announced it is setting up a task team to tackle hate crimes against gays and lesbians.

South Africa’s Constitution, under the Bill of Rights section 9.3 on equality, states that “the state may not unfairly discriminate directly or indirectly against anyone on one or more grounds, including race, gender, sex, pregnancy, marital status, ethnic or social origin, colour, sexual orientation, age, disability, religion, conscience, belief, culture, language and birth.”

In December 2006 South Africa made history by becoming the fifth country in the world, and the first in Africa, to legalise same-sex marriage. It was also the only republic to provide non-heterosexual individuals with exactly the same rights as heterosexuals, such as adoption and military service. The only other countries to provide similar rights are all constitutional monarchies, such as Canada, Argentina and the Netherlands.