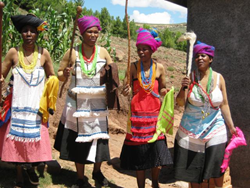 Lesotho: Ban on women chiefs in Lesotho must end

The Southern African Litigation Centre (SALC) in a landmark case set before the Lesotho Constitutional Court is challenging parts of the discriminatory Chieftainship Act, which only allows the first-born son to succeed to Chieftainship.

Even though Lesotho has signed, ratified and deposited its instruments ratifications on the SADC Protocol on Gender and Development, the Act contradicts provisions of Article 7 of which bind State Parties to put in place legislative and other measures, which promote and ensure the practical realisation of equality for women. These measures should include equal legal status and capacity in civil and customary law, including, amongst other things, full contractual rights, the right to acquire and hold rights in property, the right to equal inheritance and the right to secure credit.

“Universally denying women the ability to succeed to chieftainship entrenches the view that women are subordinate members of society and is a fundamental breach of their constitutional rights,” said Priti Patel, Deputy Director of SALC.

Senate Masupha, a first-born daughter of a chief, has brought the case forward and is calling on the Constitutional Court to declare the relevant sections of the Chieftainship Act unconstitutional and permit women to succeed to chieftainship.

Intervening as amicus curiae (friends of the court), SALC’s submissions argue that the law is unconstitutional under the Lesotho Constitution as well as under Lesotho’s international and regional obligations. The submissions also document how laws that discriminate against women significantly harm the government’s ability to effectively respond to Lesotho’s HIV epidemic.

This case is part of a broader trend in the region to change or repeal laws which explicitly promote gender discrimination.

Adapted from an article by OSISA
Source All Africa.com

0 thoughts on “Lesotho: Ban on women chiefs in Lesotho must end”

If senate succeeds in this case she will have set precedence for Princess Senate who is the first born of the King but whose younger brother Lerotholi is seen as the heir to the throne mainly on the basis of being male.

Comment on Lesotho: Ban on women chiefs in Lesotho must end Cancel reply