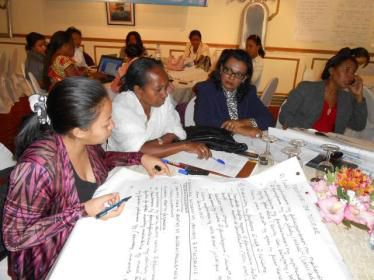 Madagascar: A draft of national action plan on gender, peace and security

The time is now. Madagascar must have a relevant draft for the implementation of the UNSCR 1325 on Gender, Peace and Security, because it is crucial to apply basic laws on Human Rights that protect women and girls before and after conflicts. Stakeholders held a workshop for drafting a National Action Plan on Gender, Peace and Security held a workshop from 4 – 6 September 2012 on Antananarivo a part of the recommendations that came from a first workshop of the Alliance gender and security cluster in Madagascar in November 2011. The Institute of Security Studies in its role as the lead organisation of the peace and security cluster in the region facilitated the process.

Stakeholders remain united on this agenda including the United Nations family, the Southern Africa Gender Protocol Alliance led by the Federation for the Promotion of Women and Children (FPFP and National Council of Women in Madagascar.All the regions of Madagascar were represented by the 91 participants that is, 63 females and 28 males during the three-day workshop for drafting a National Action Plan.

Before the second workshop, partners conducted qualitative studies throughout the 22 regions of Madagascar to collect realities concerning the causes and manifestations of insecurity, the challenges of peacekeeping and peace building, specific for each region.

These studies demonstrated that women and children are still enduring the worst effects of insecurity and conflict all over the country. This is despite knowledge that women have a critical role in the prevention of insecurity, in conflict resolution, in maintaining peace, and in peace-building.

It emerged that it is essential to highlight the importance of women’s full participation in peace-keeping processes as well as to encourage women’s access in decision-making positions in the security sector.

A draft action plan came out at end of the workshop. Participants presented this to officials during the closing ceremony. The action plan calls on different actors at every level to play a role.

Key elements include strategies and actions such as the implementation of basic laws, policies and strategies to end crime and theft at local level, the promotion of good governance, policing, the need for social, cultural and environmental policies that poverty which can cause instability and the need to address GBV to ensure sustainable development.

All eyes are on Madagascar as one of the few countries that has developed an action plan on UN Resolution 1325 to see if they implement this in order to have a country where gender equality, peace and security reign; a necessary condition for sustainable development.

Comment on Madagascar: A draft of national action plan on gender, peace and security Cancel reply