Barometer Newsletter Malawi: Women’s education the path to the Pr... 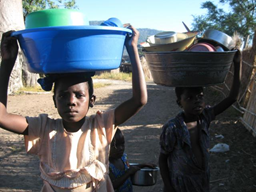 Malawi: Women’s education the path to the Presidency

On an elegant veranda adorned with a red carpet, Malawi’s Vice President Joyce Banda recalls how her childhood friend Chrissie Mtokoma was always top of their class and how she struggled to beat her. But now decades later Banda is a likely contender for the country’s presidency in 2014, while Mtokoma lives in poverty.

Banda tells parallel narratives contrasting her own upbringing with that of Mtokoma’s. “In the village school, Chrissie was first in her class, all the way to standard six (grade eight),” she tells IPS. “I was always number two or three, always fighting to beat her. But I couldn’t.”

Later, both girls were accepted into prestigious secondary schools. But after just three months, Mtokoma was forced to drop out.

“Chrissie’s uncle couldn’t pay for a second semester,” Banda says. “That was it for Chrissie. She went back to the village and into a vicious cycle of poverty, ignorance, early marriage, and then early motherhood. By the time I finished school, she had maybe five children. And today, Chrissie is where I left her.” Click here to read more.

0 thoughts on “Malawi: Women’s education the path to the Presidency”

The proposed GFTA for Southern and East African cruitones is definitely a step in the right direction for economic development, thereby increasing the standard of living in these areas. Economic autonomy for Eastern and Southern Africa is critical for their participation in the world economy for the 21st Century.

Comment on Malawi: Women’s education the path to the Presidency Cancel reply