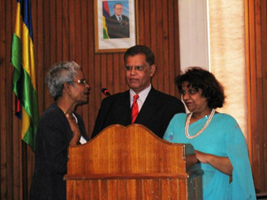 The Gender Links Francophone Director Loga Virahsawmy has called on the government of Mauritius to sign the Southern African Development Community (SADC) Protocol on Gender and development.

Speaking at the award ceremony of the first Mauritian Gender Justice and Local Government Summit, Virahsawmy asked Kritee Ram, Special Adviser on politics in the Prime Minister’s Office to make an official request from all participants, the audience and members of the jury that the SADC Protocol on Gender and Development be signed.

The GL Francophone director noted that amendments made to the Constitution to allow at least 30% men or women to stand as candidates for the forthcoming local government elections pave the way for the signing of the Protocol.

Mauritius and Botswana are the only two countries that have not signed the Protocol that has 28 targets for the attainment of gender equality by 2015. Both countries have cited contradictions between provisions in the Protocol on affirmative action and their constitutions.

This argument has fallen away in Mauritius following the amendment of the Constitution to allow for a quota in local government. HerveAime, Minister of Local Administration talked about the long road travelled by women since 1970 and said that the Local Government Act will allow a bigger participation of women at local level and they will be good politicians. “Local Government is a popular University in miniature. If a person starts at local level that person will become a good politician.”

The Mauritius Local Government and Gender Justice Summit and Awards took place from 6 to 7 March at Hotel Gold Crest in QuatreBornes. Of the 18 award entrants, seven won prizes to go on to the GL Regional Summit from 23- 24 April in Johannesburg. They will then compete with entrants from other SADC countries.