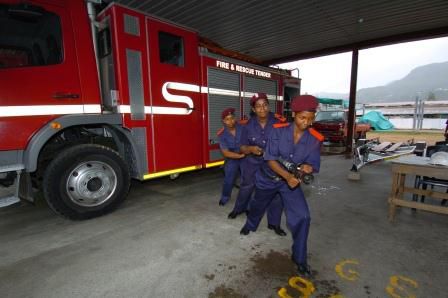 For the first time in the history of Mauritius, women are breaking stereotypes and entering a formerly exclusively male dominated field. This area is a tough and physically demanding one: Fire-fighting!

Even in films, it is rare to see women breaking through fire and rescuing lives. This scene will become a reality in Mauritius.

Mauritius has not signed the Protocol on Gender and Development yet but the country is already implementing nearly all the 28 targets of the Protocol. Article 19 on equal access to employment and benefits urges States to put in place measures to ensure the eradication of occupational segregation and all forms of employment discrimination.

These six pioneering women in the field of fire fighting mark another milestone towards gender equality. Women have a special role to play not only in rescuing lives but in giving proper support and care to all those who have been through the traumatic experience of being caught in a fire.

Le Defi Plus (15 January) newspaper gave coverage of these six women breaking stereotypes. Former Prison Officer Poonam declares that she has always been passionate about helping other people and that fire-fighting represents a challenge. They are all more than ready to start on this adventurous journey where human lives will be saved.

The Assistant Chief Fire Officer Louis Regnaud expressed appreciation of these women whom he described as courageous, dedicated and passionate. The women received a warm welcome and Regnaud emphasised the need continue making an effort to increase the number of women fire-fighters.

Women fire fighters will receive the same training as their male counterparts to make sure that they are as physically fit for climbing these ladders, fighting these fires and saving those lives.