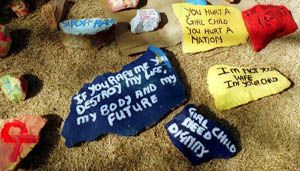 More than three quarters of South African men have perpetrated violence against women in their lifetime and more than half of women in South Africa have experienced gender-based violence.

These preliminary results from a Gender Links GBV Indicators Study have recently been highlighted extensively in Southern African media.

Although the results are stark and alarming, their publication far and wide means the study has already been a success.

Apart from raising awareness, the project aims to develop and pilot comprehensive indicators to measure gender-based violence which can then be used to measure progress.

The SADC Protocol on Gender and Development calls on member states to halve current levels of gender-based violence by 2015, but the problem with that target has been around how we know when or how that target will be reached. This dilemma was the inspiration for the GBV indicators project, which has already been piloted in Gauteng province of South Africa, Botswana and Mauritius.

In Gauteng, the data collection and analyses phase of the prevalence and attitudes is complete. The preliminary findings noted above were disseminated during the 2010 16 Days campaign. For detailed analysis, please click here.

Equally discouraging preliminary results of a political discourse analysis were later shared on the annual Human rights day on 10 December. Gender-based violence is almost completely missing from the South African political agenda. Of the 1956 political speeches analysed, only 4.8% specifically mentioned gender-based violence. Of these, just 1% specifically noted GBV as an issue, while the others merely mentioned the subject. Of President Zuma’s speeches, only 5.93% mentioned GBV. Click here to read more.

There were positive spin-offs to sharing the preliminary findings. The South Africa Police Service (SAPS) has made commitments to improve recording of crimes so that other forms of gender-based violence can be captured. For example, SAPS will consider:
– Adding a relationship category that will add understanding to intimate partner violence statistics as well as inform femicide statistics.
– Reporting sexual offences generated by police separately from those reported by the public. This is in response to the outcry about the inclusion of sex work and pornography under sexual offences.
– The possibility of reporting on domestic violence in the annual crime report, although this should become possible after the implementation of the relationship category. Click here for related article.

Watch this space for monthly updates!

One thought on “Measuring gender based violence”

Pingback: The trial of Oscar Pistorius and Gender-Based Violence in South Africa