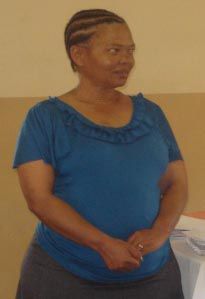 Namibia: A woman of courage

She is referred to as someone who can change things in a shortest positive way especially when it comes to issues of women, youth and children. She joined active politics relatively late that is after Namibia attained its independence on March 21, 1990.

Maria Tieties is a professional nurse at the Aroab state hospital and the deputy Chairperson at the Aroab Village Council. She has been a resident of this village for over 30 years now. Asked about her surname ‘Tieties’, she proudly said it is her husband’s name, and writes it as ‘Titus’.

This surname appears on her official documents. Even if she is Titus, the name Tieties has become a house hold name. Commenting on the stereotype around women participation in politics she said, ” Many say politics is a man’s world that has been forced onto women”. She added that this myth is meant to keep many outside the political arena not to challenge that ‘political space’ by bringing more women aboard decision-making she lamented. But when many of the women at the village asked her to stand as a candidate says Tieties, “I accepted it with open hands”.

She was added to an opposition party list for Local Governance election, 2010. She said that because she had no previous experience in local governance politics she was hesitant at first.

Said Tieties, ” at that time politicians were talking about “spin doctors” that would help them with their election campaign – I did not have anyone to spin my campaign. Neither did I have money to attract potential women voters to help with my campaign.”

It is fact that women candidates need more education in campaign methods and many other issues when they decide to stand as election candidates.

Having realised all these obstacles, it took her sometime to give a positive response to that political party’s request. At that time she did not have any ‘spin doctors’ that will carry her name through to the communities and a strong support base that could guarantee a win for her.

But after she took on the challenge, working with the community mainly women during the campaign period proved to be a bonus for her. I was able to overcome. There were three other women from rival political parties who did not make it to the end.

“Now that I am elected I also represent them” says the deputy Chairperson of the Aroab Village Council. She was happy she stressed, that women of her village were also making a difference, by standing as candidates regardless of their political affiliation.

Tieties remarked, ‘We have fewer women that have excelled, especially after the 2010 local authority elections. Namibia previously stood at 42%, but now the country is facing more challenges than ever before as shown by the decline in women representation”. She spends much of her time encouraging women to vie for decision-making positions.

“I heard about the SADC Protocol on Gender and Development that is asking all countries in the region to show case where they are with respect to achieving the 5050 women representation and participation come 2015 deadline. The attainment of 5050 should no longer be a dream but a reality” says the female politician.

Her belief is that the more women the country has produces in politics, the more progress it will make around issues related to gender and equality.

“I can bring more changes to the face of the Village Council” she said confidently. ‘I have the support of the women of this village; they proved themselves during the elections. I also promised other women who could not make it to the chambers that I will carry their ‘torch’ as well.

I am happy that out of four women candidates, I sailed through and I am now the Deputy Chairperson. The male councillors now know where I stand as far as women and developmental issues are concerned. There will be no compromise when matters related to the upliftment of women are under consideration. I believe that women are rightly placed to deliver at local government level and on issues that conern those at grassroots” she said.

During her reign as Deputy Chairperson of the Village Council, she promised to make sure that development comes to the Village.Tieties also promised to fight poverty in all its forms, by bringing in some projects that will change the lives of many residents especiallywomen and vulnerable children. She appealed to Women Councillors throughout the country to remain role models in their communities.

Tieties was quick to say that, all councilors were elected at the Village by women, as they make up the majority of the Village residents. And so, these votes need to be translated into re-investing in women’s empowerment.

Comment on Namibia: A woman of courage Cancel reply