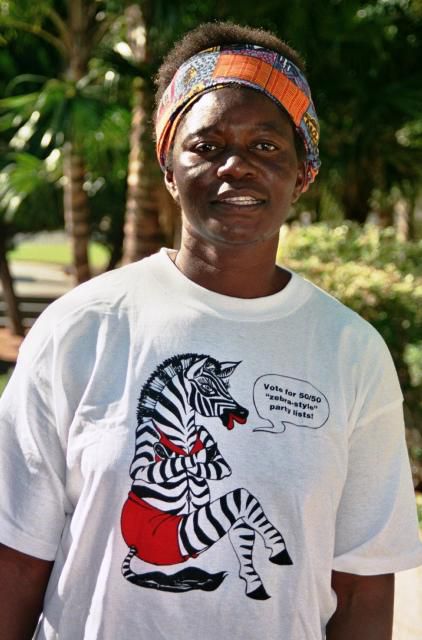 The NANGOF Trust gender sector, which is the Southern Africa Alliance focal network in Namibia, handed a 5050 submission to the Chairperson of the Law Reform and Development Commission, Sacky Shangalaon 14 March at a consultation meeting withcivil society.The regional Alliance Secretariat based at Gender Links and the regional Gender and Governance cluster led by Women in Politics Support Unit (WiPSU) supported the submission.

The group handed to Shangala a copy of the research paper 5050 Options for Namibia initially commissioned by the Namibian Women’s Manifesto Networkthen led by Sister Namibia and produced by Dianne Hubbard of the Legal Assistance Centre in 2002.In the same year, Hubbard was commissioned by the women’s movement to produce a layperson’s draft 5050 Bill that was taken to parliament and used to lobby support throughout country.

The trend shows that, without affirmative action legislation at the regional and national levels, all the public rhetoric over the past years in support of the equal representation of women and men in elected positions of government has been ineffective in holding political parties accountable to the rights of women as equal citizens. The draft bill proposes the zebra lists system for selecting candidates at all levels.

Sacky welcomed the submission and its supporting documents and asked the women’s organisations to commission a lawyer to review the draft 5050 Bill in the context of the electoral law reform process that is taking place in Namibia.

It hoped that since Hubbard is now a full member of the Law Reform and Development Commission she will be able to assist with taking the process forward. Namibian journalist and main author of the submission Liz Frank is positive that the campaign is likely to yield results.

“My feeling is that this is a conducive time for the 5050 campaign in Namibia” given that there are likely to be many changes and political shifts at the next national elections in 2014.
Click here to view the submission(Simone please provide link after you have put up the submission)