Alliance news Regional: 2012 Barometer at an advanced stage, to ... 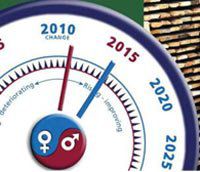 Regional: 2012 Barometer at an advanced stage, to be launched in Maputo ahead of HOS

The production of the 2012 edition of the SADC Gender Protocol Barometer is at an advanced stage. Gender Links led the Alliance in conducting an extensive monitoring and evaluation exercise to come up with the Citizen Score Card, an understanding of whether gender attitudes are changing and to gauge whether knowledge of the SADC Gender Protocol in the region is increasing.

The methodology improved this year with questionnaires being taken to peri-urban localities in order to ensure that there is representation of the community women and men rather concentrate on those in the big cities.

Close to 4000 respondents from all the 15 SADC countries participated in the Attitudes survey through various events and processes. Almost the same number filled in the SADC Gender Protocol Quiz. However, the Citizen Score Card proved to be a more sophisticated tool which is used to gauge citizen’s perceptions on where their respective countries are towards meeting the 28 targets. Only about 2000 respondents were obtained.

The scores have been analysed and the results will feature in the Barometer. This will be compared against the Southern Africa Gender and Development Index (SGDI), running for the second year, which complements the CSC. The Alliance has collated the data and the SGDI for 2012 has been calculated. It is an objective score based on 23 indicators across six sectors: Governance, Education, Media, Health, HIV and AIDS and Economy.

The edition will have two new features to look forward to. The first is a section on gender and climate, which attempts to look at where women are in decision making in that sector. There are other qualitative indicators based on a draft Addendum on gender and climate change developed by the Alliance as part of a campaign that this be added to the 2008 SADC Gender Protocol.

With support from UN Women, the 2012 Barometer introduces the concept of costing the SADC Gender Protocol at national level. Country researchers made an attempt to track government expenditure in programmes and activities that contribute to achieving gender equality with a special focus on the 28 targets of the SADC Gender Protocol.

Comment on Regional: 2012 Barometer at an advanced stage, to be launched in Maputo ahead of HOS Cancel reply