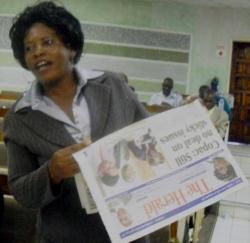 Regional: An innovative approach to monitoring progress on gender equality in the media piloted

New information will soon be available on progress on the proportion of female versus male sources in news content as well as where women are sitting in terms of decision making positions in the media. Media houses who are part of the Centres of Excellence (COE) in gender mainstreaming in the media are conducting a self-monitoring exercise of performance against set gender equality indicators.

As part of the COE project, Gender Links has developed a self-monitoring tool that allows media houses to capture institutional as well as content data. The tool has an in-build data analysis mechanism thereby allowing media houses to view profiles at the click of a button.

This exercise allows media houses to take ownership as well as reflect on their performance against set indicators. Indicators include the proportion of women sources, women in images as well as women in the media house. This is the first time that such an exercise has taken place in SADC.

The consolidated data will provide a measure of progress of media houses towards meeting the SADC Gender Protocol targets, which call on Member States to take measures to promote equal representation of women in ownership of, and decision making of the women. The Protocol also calls on media to give equal voice to women and men in all areas of coverage including increasing number of programmes for, by and about women on gender specific topics and that challenge stereotypes.

Comment on Regional: An innovative approach to monitoring progress on gender equality in the media piloted Cancel reply