Barometer Newsletter Regional: Winners at country level gear up for the... 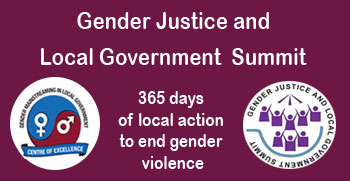 Regional: Winners at country level gear up for the regional Local Government and Gender Justice Summit

Winners that received awards at the country level Local Government and Gender Justice mini-summits held by Gender Links in Botswana, Madagascar, Mauritius, Zambia and Zimbabwe during the International Women’s Month of March are preparing to battle it out at the regional Summit set to take place in Johannesburg from 23 -25 April. Namibia will hold their national summit shortly before the regional one from 13 – 14 April.

Gender Links (GL) will be holding the third annual regional Gender Justice and Local Government Regional Summit and Awards under the banner “365 days of local action to end gender violence”. The summit will show case best practises in mainstreaming gender and ending gender violence at the local level.

The summit will includekey note addresses and parallel seminars by international and local experts in the field of gender violence at local government level and gender justice. The summit will include a special session on the recent local elections in Zambia and Lesotho, and upcoming elections in Madagascar and Mauritius that has just adopted a quota on women in local government as a result of the tireless advocacy work of this programme.

While the summit call is open to all councils and Community Based Organisations, GL is specifically targeting the 117 local councils that are part of the Centres of Excellence Initiative to submit entries for good practise in mainstreaming gender at the local level. All councils that have completed the ten stages will receive certificates of completion as verified by GL field staff at the in-country awards and awards. In addition, Councils that have demonstrated exceptional leadership and commitment through implementation will be recognised through special awards.

Comment on Regional: Winners at country level gear up for the regional Local Government and Gender Justice Summit Cancel reply