Barometer Newsletter South Africa: Domestic violence must be included i... 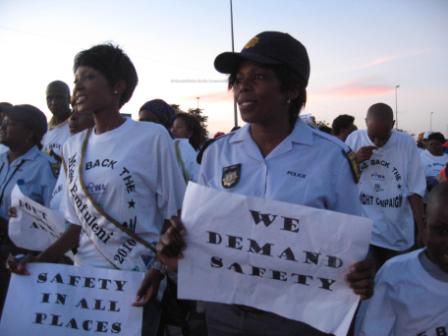 South Africa: Domestic violence must be included in crime stats

The South African Police Minister Nathi Mthetwa released annual crime statistics for 2010-2011 on Thursday, 8th September 2011 at Sheraton Hotel in Pretoria. On average, crime has decreased with the murder rate dropping by 6.5%. However it is disturbing that a 5.6% increase in the number of women murdered was registered last year in spite the claim by police that protecting women and girls is their priority. This while police claim violence against women and children is a priority. In the ten years since the 1998 Domestic Violence Act (DVA) came into force, domestic violence remains a crime which receives scant attention and is not gender disaggregated in South Africa Police Services’ (SAPS) annual crime statistics. Most domestic violence cases are recorded as assault or assault with the intention to cause grievous bodily harm.

The Sowetan newspaper article that appeared on 12 September 2011 is an example that demonstrates the gaps in the data collection methods. Bossie Phungula, husband to Annie Phungula, admitted to stabbing his wife five times, pouring petrol over her and setting her alight last year. This brutal incident, which led to Annie Phungula’s death four months later, occurred in the family home in front of their children and maid. One year later, Bossie Phungula was released due to “lack of evidence.” Such a repulsive state of affairs is one reason it is so unfortunate that national annual crime statistics remain silent on domestic violence. Click here to read more.