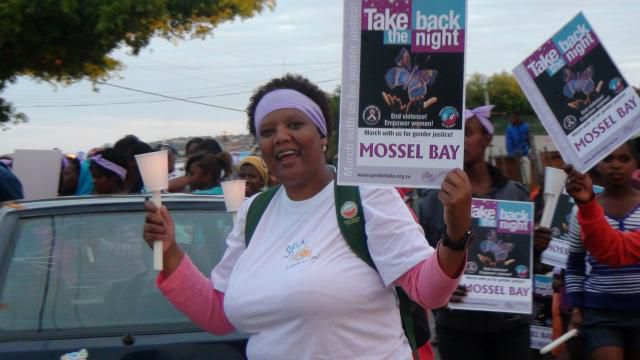 Mossel Bay municipality recently broke new ground by being the first municipality in the whole SADC region to host a summit against gender based violence, replicating the GL regional Gender Justice and Local Government Summit. The town’s mayor, Lady Alder Marie Ferreira and other municipal dignitaries attended the five-day summit held from 19 – 23 November 2012.

Mossel Bay Municipality is one of the 12 Centres of Excellence in Gender Mainstreaming in Local Government in South Africa, which receive on the job support from Gender Links. GL provides the same support to 153 councils in 10 SADC countries.

The council held the summit in the build-up to the 16 Days of Activism campaign under the theme: No more victims summit and several activities were lined up in the five-day long summit. This included 45 presentations; a day dedicated to mini games for people living with disability and the elderly; Safety Summit, No More Victim Tea and a two-day wellness day. The Summit ended with a gala dinner and awards evening for those who presented best practices and signing a Statement of Commitment to the COE process with Gender Links.

Since joining the Centres of Excellence (COE) process in May 2011, the council has made relative progress in terms of implementing its gender action plan, which integrates key provisions of the SADC Gender Protocol. Key targets include strategies to increase the women’s representation in key decision-making positions and their recognition in general.