Barometer Newsletter Tanzania: Calls for equal participation of women a... 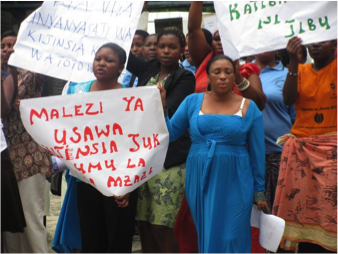 Tanzania: Calls for equal participation of women and men in Tanzania upcoming polls

Women groups in Tanzania have issued a strong manifesto calling for equal participation of women in the upcoming elections. The country will in just two weeks go to the polls to elect a new government.

The manifesto which has been prepared by TGNP mtandao has brought together voices from the Coalition of Women Constitution and Election representing more than 65 CSOs. The Election Manifesto is making specific demands to the existing government, to political parties, to candidates and to the incoming government.

“We collectively demand that electoral resources for this year 2015 to benefit both women and men fairly and that, purposeful measures to be undertaken to level the playground. The overall goal of this Manifesto is to provide a unified voice of women and the various marginalised groups particularly women with disabilities, demanding effective, and equal participation in this year’s election”, reads part of the manifesto.

Demands for the 2015 elections

– Spell out specific challenges which women face in electoral processes
– Articulate the responsibility of government in overseeing gender responsive, free and fair elections
– Propose strategies for inspiring electorate and particularly women to participate in the electoral process.
– Advocate for alternative electoral processes which promote gender equality and women’s empowerment.

Tanzania is one of the SADC countries that has adopted a mixed electoral system, with women able to run for the openly contested seats, and be awarded an additional 30% of seats on a PR basis in accordance with the strength of each party. Tanzania has a Constitutional quota, and there is a strong campaign to raise this from 30% to 50%. The unique mixed system of combining quotas and FPTP system could facilitate the seal of approval that indeed, women and men women and men are equally entitled to participate in elections, although in reality men are the majority of candidates and winners. However, in addition to the FPTP seats, 30% seats are distributed to parties on a PR basis for women only. This system does not directly infringe anyone’s constitutional rights and is therefore less open to contestation that a mixed system and quotas help to rapidly increase women’s political participation.

Later this year Tanzania will hold a referendum on the draft constitution which prescribes a 50% quota for women’s representation in political decision making: an increase from the current 30% quota. At present, women parliamentarians are appointed to special seats by parties. Under the proposed Constitution, political parties would lose the power to nominate women to parliamentary seats and instead, voters in every constituency would elect two parliamentarians, of whom one has to be a woman.