Barometer Newsletter The MDG summit outcome: what next?... 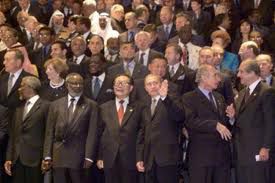 The MDG summit outcome: what next?

On 4 October 2010 in Geneva, the United Nations Non-governmental Liaison Service (NGLS) organised a briefing and multi-stakeholder interactive panel to take stock of the outcome of the “MDG summit”- the UN High Level Plenary Meeting which was held in New York on 20-22 September to review and accelerate progress in the realisation of the Millennium Development Goals (MDGs).

The MDGs, which grew out of the 2000 Millennium Summit, are composed of eight Goals, most of them with time-bound targets, ranging from halving hunger and poverty by 2015 to dealing comprehensively with the debt problems of developing countries. The 2010 MDG summit, which brought together some 140 Heads of State and Government, adopted an outcome document which identifies lessons learned over the past 10 years and an action agenda with recommendations to advance progress on each of the Goals.

The NGLS panel was a timely occasion to examine – from the perspective of representatives of civil society, the private sector and the UN system – opportunities contained in the outcome document as well as challenges and gaps that need to be addressed. Given the strong level of civil society participation in the summit preparatory process, the meeting focused in particular on three areas where expectations for an “MDG Breakthrough Plan” were particularly high:

An “aspirational” outcome
Most speakers described the outcome document as more “aspirational” than action-oriented, often drawing from already agreed inter-governmental language. On the positive side, panellists outlined a number of areas which could be used as “anchors” to foster meaningful progress. These included:

Comment on The MDG summit outcome: what next? Cancel reply