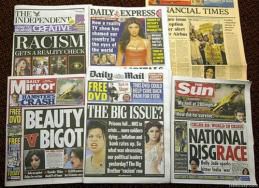 Sexist stereotypes, humiliating photographs of women and male by lines dominate the front pages of British newspapers, according to research carried out by the industry body Women in Journalism (WiJ).

Male journalists wrote 78% of all front-page articles and men accounted for 84% of those mentioned or quoted in lead pieces, according to analysis of nine national newspapers, Monday to Saturday, over the course of four weeks.

The only females to be regularly pictured in the period were the Duchess of Cambridge; her sister, Pippa Middleton, and the crime victim Madeleine McCann. The three males most likely to be photographed were Simon Cowell, whose biography was published that month; Nicolas Sarkozy, who was fighting an election, and Prince William.

Women’s groups, which complained about sexist stereotypes in the media in a presentation to the Leveson inquiry into media ethics, welcomed the research. Anna van Heeswijk, chief executive of Object, said: “With newspapers so male-dominated, is it any surprise that women are portrayed the way they are? Changing the number of female writers and the ways in which women are portrayed in the media is crucial if we are serious about wanting a socially responsible press.” Click here to read more