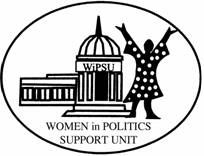 WIPSU is a Women’s, feminist non-governmental organisation, registered in Zimbabwe. WIPSU provides support to women in Politics in Zimbabwe with a view to increase their qualitative and quantitative participation and influence in policy and decision making processes. Its vision is “a society in which women exercise and enjoy their human rights and participate as equals in all political processes with full citizenship rights. Its mission is “to strengthen democracy and governance practices through the effective participation of women in political office and as political constituents.” In order to achieve this vision and mission, WIPSU works around the following:

WIPSU is proud to be a key player in empowering women to participate in political leadership and decision-making. The critical question is: How can the 50/50 Campaign be used to promote women’s participation in decision-making in light of the upcoming elections? WIPSU launched its 50/50 Campaign in November 2006 with the aim of motivating women not just to vote but also to stand for political office and to facilitate the attainment of the benchmarks set by key regional and international human rights instruments.

There has been a lot of rhetoric in support of women’s equal participation in politics. What then is the justification for women to demand 50/50 representation in policy and decision-making positions? There are several concrete reasons:

Women make up more than 51% of the population of most African countries, including Zimbabwe (approximately 52% in the last census). Participatory democracy cannot be achieved if more than half of the population remains voiceless with no full access to decision-making and to the activities that influence the course of their future. According to the Inter-Parliamentary Union (IPU), “genuine democracy cannot exist without the full and equal participation of both men and women in politics.”

Simply put, it is unjust to completely exclude women from politics or to include them to the extent that we have seen in Zimbabwe today. All human beings are equal and women possess the same rights as men to participate in the governance of their country. If human rights are also women’s rights then the right to political participation as enshrined in most if not all the key human rights instruments should be enjoyed by women as well. Zimbabwe has committed to the following local, regional and international policy frameworks which promote and support women’s rights and their equal representation in decision making:

Therefore, it remains the State’s duty to honour, fulfil and implement all these commitments to women’s political rights.

Regionally, Rwanda is the only country to have surpassed the 50% mark with 56.3% women in its current Parliament. South Africa follows closely behind at 45% as at the 2009 elections. According to statistics from the Inter Parliamentary Union, given the Sub-Saharan Africa regional average of 17.8% women’s representation in Parliaments, it will take some 25 years just to reach the a critical mass of 30% and another 25 years to reach 50%.

Why have we been failing to meet these targets?

Legal and policy gaps
There are several reasons why to date we have failed to meet both the 30% and the 50% targets. An assessment of the current legal and policy framework for women’s representation in politics in Zimbabwe has shown that the relevant laws and policies are somewhat deceiving. While there appears to be no legal barriers to women’s representation in Parliament in Zimbabwe, the legal framework for elections (the process which enables women to enter parliament) has glaring gaps. Both the Constitution of Zimbabwe (1980) and the Electoral Act (chapter 2:13), seemingly promote women’s political rights, but make no specific provisions for strategies such as quotas or reserved seats to increase women’s representation in Parliament. Further, there is no provision in the current Constitution of Zimbabwe that allows for International and Regional conventions that, once ratified by the Government of Zimbabwe, should become part of national laws without the need for domestication. This means the SADC Protocol on Gender and Development, ratified in October 2009, will take many years to be domesticated, yet the next elections will be the last chance to achieve the 50/50 benchmark set by that Protocol.

In WIPSU’s experience, women face the following challenges:
– Lack of financial resources;
– Limited access to education and the same work opportunities as men;
– Negative stereotypes and social attitudes;
– The burden of domestic responsibilities;
– Violence and lack of access to information.

50/50: What Next For Women?
It is clear from this analysis that some urgent fundamental shifts and changes will have to be made in order to improve the situation of women in politics, especially in the forthcoming elections. As a starting point, legal and policy reforms are required in order for women’s representation in politics to improve. The following recommendations are made in this regard:

a) Legislated/Constitutional Quotas
There is need for a 50% quota system to be incorporated into the new Constitution – Zimbabwe is currently involved in nationwide consultations in preparation for the drafting of a new Constitution. The new Constitution should make it clear that each party must adopt the quota system and the issue of reserving seats for women. The 50% quota should be used for candidate selection as well. In Tanzania, 37 of the 42 appointed Parliamentary seats are reserved for women. A legislative quota such as in Tanzania provides greater guarantee for increasing women’s representation in political structures and can effectively facilitate women’s entry into Parliament. Rwanda has a constitutional quota which reserves 24 out of 80 seats for women. Other short to medium term strategies such as statutory quotas and reserved seats should be applied across the board i.e. from the candidate list to parliament.

b) Electoral System
There is need for a hybrid electoral system backed by specific legal provisions e.g. South Africa uses the Proportional Representation and the First Past The Post (FPTP) electoral systems as well as quotas.

c) Financial Support
Women require financial and material resource support for the elections – a specific recommendation is to set up a special fund for female politicians. There should also be legislation on political party funding which is sensitive to the needs of female politicians. There should be conscious resource allocation to female candidates within political parties. There is also need to find innovative ways to increase resources for women to campaign in elections.

There is need for training and ongoing capacity building for female politicians and political aspirants in both rural and urban areas which should target grassroots women to help build the critical masses of women who can be fielded for political positions. This can be done by ensuring appropriate linkages between female politicians and agencies that empower women e.g. WIPSU. Communities also need to be educated on the importance of women’s representation in politics and decision-making So as to change peoples’ perceptions. It is also critical that the profile of women within parties be raised through gender sensitisation of party members. More “educated and professional women” should also be encouraged to join politics and should not only hide in NGOs.

e) Security and Safety
Women need to feel safe in order to participate in politics. The state, through the police, should guarantee security of female political aspirants and the majority of voters, mobilisers and campaigners who are mostly women.

Below are some of the practical steps that can also be taken:

This is a clear demonstration that with donor support and sound financial investment in this area of work, and given time, results can start to be realised which will have positive returns for women.

Good day,
I am a student at Domboshawa Training And Development Institute and one of the subjects I am taking is political science: I am having hard time to get material on the assignment question below.

Q. Give a critical assessment of the role of Zimbabwean women in politics.
How can I be assisted to get the answer to the question above?

Which sourses can I use to get the answer to the question?

Since I am a Wipsu member my name is Evelyn Garande I’m now residing in the United Kingdom i support women’s rights in every aspect so that we have liberty to control our lives as human beings.

Thanks for the infor , plz kindly also supply another infor on the effectiveness of the roles of wipsu in the drive to promote engagement of zimbabwe woman in politics

we are a women organization working in Masvingo. we are kindly requesting for email address

this reference is wrong, please correct it. Made and Mpofu did not write that book.