Botswana: Men and Boys for Equality

Male Involvement in the fight against Gender Based Violence 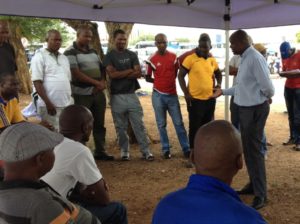 The organization is focused in the Southern region because, apart from being new and is based in Gaborone, Our services are complimentary but Men and Boys offers more of group support instead of just individual counselling. Men and Boys for Gender Equality (MBGE) has a well-developed public education program on gender based violence and associated issues. The public education is contacted through various media in­cluding radio shows, television shows, adverts, the use of social media and community presentations in kgotlas and workshops. The organization normally engages men and boys to address GBV and promote gender equality. Gender equality can be promoted by allowing men to share information on their own which really affects gender Men and Boys organisation offers the following programs

One man can This program focuses on training men on issues around gender based violence. The perception is that men are highly involved into violence and commit a vast majority of the violent acts but however, with the training that comes with the program men are re-idealized to think in better ways but most importantly to have good manners. MBGE mainly uses the One Man Can Manual for training and public education. The organization has arranged trainings for Project Concern International where PCI grant recipients were trained on engaging men in addressing GBV.

As the name indicates, the concept is to show that even if we begin with one man, there is a probability that he can positively influence other men to play a role in ending gender based violence. Therefore, the program has trained a large group of men; chiefs, performing artists and faith leaders due to the belief that people tend to respond to and listen to what they say. Hence they are the right candidates who can disseminate the message to the broader community

Men care This program entails of training and encouraging men who are expectant fathers to be responsible on women from conception period, birthing and child rearing. The training further state that each male individual should facilitate the partner in home chores and anything related to that. The program is concerned on the fact that normally active and responsible fathers are more attached to their children in contrast to the non active ones. The program also encompasses the emphasis on partaking the roles of a father whenever its necessary. Additionally, the program has support groups for these expectant fathers, the groups provide a platform for sharing ideas, seeking further assistance and mentorship.

This is the Alcohol Rehabilitation intervention project funded by the Ministry of Health and wellness through the alcohol levy. The project was mainly targeted to the youth by decreasing substance abuse and rehabilitating them to their societies and families. The program used efficient manners  of counseling, support groups and providing  alternatives to alcohol use through boot camps  .The program which embarked in 2015 is carried out in Gaborone and other areas

Men and Boys established this projects for Gender equality, to reduce alcohol abuse and encourage a life of sobriety while also helping individuals build lives that are more positive. In pursuance of the projects Men and Boys have hosted boot camps, support groups, individual and group counselling sessions, family counselling and “Blue Couch” sessions, which involved local celebrities. This projects is funded by the Ministry of Health and is not gender-specific.

A registry of attendance is used as a measuring tool as well as quarterly reports. Individual screening tools and a template provided by the Ministry of Health for recording progress are also used.

With gender-based violence (for example rape), you cannot only address one party, the victim or the perpetrator. Both have to be involved in the discussion of the issue for a solution to be found. This project was open to all and it just so happened that more females than males wanted the help. 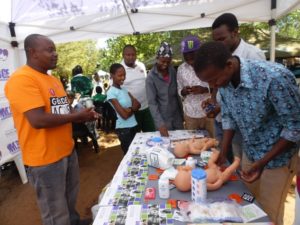 Early this year, Men and Boys for Gender Equality (MBGE) has conducted Kgotla meetings in Hatsalatladi, Lobatse, Goodhope and Molapowabojang which served as a form of community engagement in which the members were encouraged to actively take action to challenge gender based violence, promote gender equality, educate and promote children’s rights and preventing HIV.  Furthermore, the team conducted a Men in the Kitchen training in Ghanzi which was aimed at promoting the involvement of men in domestic duties.

The challenges men and boys are experiencing is that donors crediting funds late and inconsistent attendance of meetings are some of the challenges encountered. More over women tend to choose entrepreneurial activities as replacement behaviour for alcohol abuse whereas men chose hobbies/activities such as playing football etc.

6 thoughts on “Botswana: Men and Boys for Equality”

can i please have an insight on the missions, vision and values of your organisation?
any services you offer related to HIV/AIDS?

Please I want to be one of your member or volunteer in your organization because ward(Tawana),there is too much alcohol and drug abuse. I use to be the best star mobiliser at achap. sensitizing men and boys about circumsition in terms of HIV/AIDS prevention My contacts are 77107932 or 3956841.
For now I’m working at member of parliament for g/north constituency, under (HON.MPHO BALOPI).

Kindly Contact me +26775596186. I am a victim of GBV, and am experiencing discrimination and inequality in the public offices especially Botswana Police.

Comment on Botswana: Men and Boys for Equality Cancel reply