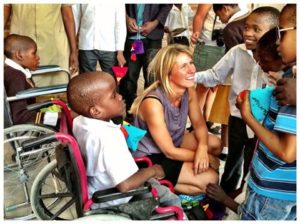 The Kachikau Special Unit is a Special Education Unit and the hostel is one of the many projects undertaken by Chobe District Council. It is within the borders of Kachikau Primary School, located in a village 97 km west of Kasane Township(Chobe enclave).The project was completed in October 2008 and it opened doors for learners for the first time in January 2009. The unit has an enrolment of 21 children(12boys and 9 girls) assessed and taken from the ten primary schools in the district. These children stay in a hostel for boys and girls with a holding capacity of thirty beds(30).It is good practice because it provide another second home for children with mixed disabilities.

The objective is to provide special education and accommodation for mentally retarded students in the district and across the country. This need was influenced by the distance of Chobe district from other neighbouring  town or villages which offers special education services. A Large number of children were found in primary schools where the curriculum offered did not cater for their disability.

The main activities are:

The project has benefited about 59 000 women with 70 active groups. The project reaches 31 000 indirect beneficiaries. The Chobe District Council allocated $35 303 to this project. In kind contributions amounted to $9 090. The total budget for the project is $44 393.

The monitoring and evaluation tools that were used to measure the impact includes workshops, meetings and feedback from the community and our partners. The rise in numbers of enrollment to the Kachikau Special unit from 21 to 31 and the attitude of parents which is evidenced by the visitation to the school. However, keeping the children at the school 24/7 have given the caregivers at home in this case who are mothers the opportunity to fend for their families whilst we help with caring for the child at the school hence equal opportunities.

Parents were not supportive of their children at the special unit in Kachikau. More children were in need of placement as they were at home and parents keeping them away. Shortage of special education teachers. Lack of individualised Learning program for the children. No separate curriculum for children with disabilities. The department of Education employed special education teachers at the special unit, and individualised programs were then developed with the aid of the special teachers from Sweden. This was advocated for during the meeting of the Swedish team during their visit to the Office of the President.

Women have been empowered firstly by the information they received during the awareness workshop they attended at the school. They were now in a better position to send their children to school as some showed that they cannot look for jobs as they have to look after their disabled children and with this opportunity they have a good option to go for poverty eradication programmes to fend for their families.

Kenalemang Gala-Cook at Plateau Primary School-She has outlined that the Kachikau Special unit really helped her in 2009 when her child was enrolled by the school when she lost her mother as a caregiver.She was employed by chobe district council the same year after enrolling her daughter and now she is providing for her 2 children and husband.

Men are now more supportive as a result of the organisations work as even the visitation at the school a reasonable number is coming forth and even placement of their children as they come for information at the office regarding their children. Men also now accompany their children to hospital during medical check-ups with psychologists who place children at the unit.

Timothy Kanwi- Caretaker-He is one of our caretakers at Kachikau Special Unit he was transferred from being a cook to this post and at first he was having difficulties in working with pupils living with disabilities as it as he regarded the work as for women. In this case he could not bear the responsibility of taking the children for medical check-ups outside and within as he felt people will ridicule him and also changing diapers for him was not traditionally approved and since the training and the awareness workshops he has managed to fit in and doing great.

The campaign has resulted in changes in power relations though not massive but one can confidently say that a lot can be desired as we now see a change in sharing responsibility as men come forth to collect diapers for their children which was never the case in the past.The men also remain home with their children while mothers access programmes offered to financially sustain themselves.

Changes at community level is evidenced by the fact that community members volunteer to help at the Special Unit and assist learners with skills in basketry, pottery and weaving as some of them are not trainable in curriculum related aspects of reading and writing. They did not have any interaction with the school up until the partnership initiatives made them aware of their responsibilities as the community and they are fully involved in the children welfare and interact with them more than before. The community are now giving more to the school in terms of donations which includes equipment and also volunteer in helping pupils with skills in ball sports such as cricket which is provided by Botswana Cricket Association.

They have been a visible change in attitudes both internally and externally as we have witnessed that within the children themselves they showed high level of self-esteem as they mingled with the normal stream children which was never the case before. The people now view them differently as they have realized. that they could be disabled but gifted in other areas. They now interact with the children and give time to spend with them and try to understand them better. The behaviour pattern is now readable as most of even activities organised at the school is done by people from outside which indeed has actually been an indicator of attitude change.

The project started with a high note and we did have some observations that we strongly belief that they can work best if there can be changes in the policy and the courtesy call for the project team from Botswana and Sweden can have a positive impact in changing the aspect of parental significant role clearly stated in the Education Act as this can compel parents to understand that it is an obligation as a parent with a child living with disability to be involved and also RNPE to encompass the aspect of vocational which stipulates how these children will be assimilated and creation of job opportunities in the job market, however we are positive with time and lobbying something positive will come out.

The good practice is sustained as we have done a lot of bench marking from other similar schools in Sweden which offers such services and we have applied that to our own school and this had yield results as our children are now transformed, we also received training from our partner from ICLD in September 2016 as we have applied for second phase of the project.

Furthermore, with the skills we gained from them we are in a better position to assist others benefit for the sake of the disabled pupils who are in our care. This can be rolled up to others as we have benefited from the project a lot and information sharing is vital as it does not have any cost implication attached to it rather replicating the best practise as we have now managed to intercept all concepts of human rights, issues of GBV and gender mainstreaming.

One thought on “Botswana: Social inclusion and integration of pupils living with disabilities, Botswana”

Hello.My name is Rene.I will be in Botswana in 2 months and would like to know if you have any job opportunities available,either paid or volunteer.I have lots of experience working with children with special needs,as both a case manager,activity therapist and direct support staff.