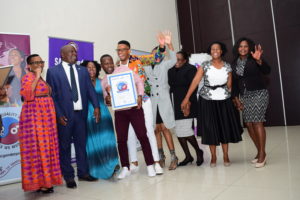 Tonota Sub-District Council has Ms. Mareledi Bantsi as the women commissioner and Mr Festus Diane as the gender focal person.Tonota Sub District Council has a five-year gender action plan that has been further reduced into annual action plans for each implementing year. The council also has a draft gender policy.The gender champion of the council is Ms. G. Gabatwesepe, who is also the Assistant Council Secretary.Women form 60.9 % of the council’s administrative wing and 11% of those women are in non-traditional roles. The representation of women in the political wing of the council is at 13.3%. Women are also represented in all of the council’s committees.The council affords men, women and PWDs equal access to opportunities. It has also formulated a gender slogan that is displayed at the council’s main notice board located at the entrance of the council. The council’s administrative wing has also signed a pledge to stop and condemn all gender stereotyping and the pledge is displayed at the council’s premises. Gender issues are standing agenda item at all council and departmental meetings. The council keeps gender dis-aggregated data and has transport facilities and ramps availed PWDs to facilitate access to the council’s services.

Local Economic Development-The council has 22 market stalls, 50% of which are occupied my woman and the other 50% by men. Youth occupy 68.1 % of the stalls while PWDs occupy13.6% of the stalls. The council offers entrepreneurship financing through programs/ schemes like Economic Empowerment, Poverty Eradication and Community Projects, RADP programs .75 % of the council’s LED financing is spent on the empowerment of women and other disadvantaged groups. 60% of such financing is spent on quotations and outsourced works from women, youth, men and PWDs. 55% of the LED is expended on tenders where the beneficiaries are the aforementioned individuals.

Climate Change and Sustainable Development-The council is currently running two tree planting initiatives, namely the Nursery for Hope and the Tag for Hope. With the former the council propagates plants within its premises and donates them to victims of GBV as start-up asserts for the latter’s business. The Tag it for hope project, is the council’s pledge to plant 100 indigenous plants by the end of 2019. As they are planted the trees are tagged with a message of hope for GBV survivors or a message speaking against gender stereotypes.  The council also has a recycle it project where it collects litter and donates it to beneficiaries of LED programs, that create artefacts from waste.

Infrastructure and Social Development-In the 2018/2019 the council acquired 17 plots and as manner of affirmative action the council has pledged to source 2 plots per quarter for GBV survivors. The council built 52 houses and received one house as a donation from the business community for destitute persons.

Sexual and Reproductive Health, HIV & AIDS-In its efforts to promote positive SRHR, the council holds discussions on issues relating to SRHR every Wednesdays after staff morning prayers. The council also commemorates international awareness days like AIDS Day. The council is moreover involved in activities to give motivational talks to children in junior schools.

Ending Violence-For its efforts towards ending GBV, the council has signed a pledge against all forms of GBV displayed the pledge on doors within the premises of the council. Commemoration events of the 16 Days of Activism against Gender Based Violence are held annually by the council and it offers support and empowerment of GBV survivors through programs like poverty eradication. The council also has Facebook page and gender corner accessible to anyone, where people can pick up material addressing gender issues.

Communication and Visibility-The council has paraphernalia with gender related messages that it uses to disseminate messages. The council also holds discussion on gender related issues on Wednesdays after staff morning prayers. Gender committee recognized as the best committee during the council’s excellence awards.

Resource Allocation-The council currently has no resources reserved for gender mainstreaming but in the past year they raised P20,00.00

Challenges-One of the main changeless is that the committee has no gender specific budget. Lack of motivation by members of the committee and the lack of understanding on what gender is, thus most associate gender issues to women only.

Lessons Learned and Innovation-The gender committee has resolved that gender mainstreaming is multifaceted and cannot be taken on by the council alone. There is also a need for inclusive and holistic approach to gender issues.

Great work. But my advice is that you should not ignore the male when developing and implementing gender equality programs. The concept is if want to be able to equally use both you hands; left and right, you cannot ignore one over the other,instead you use both them systematically