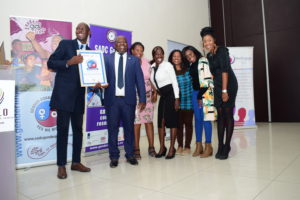 The council’s gender champion is Ms Kerileng Senwamadi and the gender focal person is Mr Obakeng Kheru. The council’s previous score was 50%.The Council is guided by National Policy on Gender and Council Strategic Plan (2018-2023) and the gender policies are championed by Sehithwa Service Coordinator and SACS.

MAA has 28 councilors within its council, 25 of them are male & only 3 are female. By contrast women make up 62% of the council’s management and 51 % of the overall council staff. Women have also taken on non-traditional roles within the council, for instance the head of department for Architecture & Buildings and the head of department for Controller of Accounts and By-law are both females. Only 2 members of the VDC’s are PWDs while men, women and youth make up 33%,67% and 19% respectively.Human Resource applications give equal opportunity to everyone regardless of gender. Women, men, youth & PWDs participate in council tenders especially tenders that seek catering services for council meetings & workshops or tenders that seek the supply of school uniforms.

Local Economic Development-The council’s S&CD hosts Mini-shows for beneficiaries of their poverty eradication program to show case their products. The 2019 Mini Show is planned for 28th June. The mini shows also attract external sources of finance like banks, LEA, CEDA who then engage with the community on financing opportunities. The council has a backlog on the poverty eradication applications that they are working to reduce. As at December 2018 the value of tenders awarded to vulnerable groups stood at approximately P8 473,506.05.

Climate Change and Sustainable Development-MAA has a Buy Back project where they buy waste from the community and give to people who recycle. The project is conducted by Public Health Attendants on weekends and happens on a rotational basis at different wards. The projects keep Maun clean and is also an opportunity for community members who are part of it to make money, as they are paid.

Infrastructure and Social Development-Allocation of land no longer council mandate but the council has acquired 5 plots on behalf of destitute persons for the year 2019/2020.For the years 2018/2019 23 women and 11 men have benefited from SHAA. The council also hosts an annual village clean up campaigns, where the 2018-small village category was won by Semboyo & Nxaraga and the medium village category was won by Tsau. Moreover, the council is currently building a new settlement called Qorotsha.

Sexual Reproductive Health and HIV/AIDS-The gender committee conducted a community education meeting on SRHR issues & HIV/AIDS at Samedupe, in conjunction with DAC, WAR, BOFWA, ACHAP. The council has hosted a care givers forum where care givers of orphaned children were trained on how to care for them. MMA also hosts retreats for orphaned children at Motlhabaneng to build the children’s self-esteem and impart life skills.

Ending Violence-Some of the council’s efforts for ending violence include providing street lights in Maun, some of which are solar lights and they have plans to erect lights in Sehithwa village too. The council has conducted community education meeting on GBV at Makakung, BDF, Prisons & BTU workshops. MMA also participates in the Sunrise Campaign and has conducted debushing exercises in Komana near the primary school and in Sehithwa near Police, to reduce these areas from being hiding places for perpetrators.

Gender Management System-There is a gender committee is active and is made up of a gender focal person, women commissioner, gender champion .The gender committee enjoys support from management and it reports to council structures such as he BALA sub-committee.

Challenges-To address one of their major challenges which is the lack of budget, the gender committee has devised to collaborate with men’s sector, who have a budget allocated to them through DAC’s office. Another challenge is the high incidence of teenage pregnancy and GBV cases and to tackle this the gender committee will continue to engage in public education exercises and collaborate with NGOs.

Lessons Learned and Innovation-The gender committee has noticed that there is low participation of youth in gender activities and they have resolved that they should make gender activities more appealing like hosting Braai session for Gender issues. The committee has also learned that gender work is not reported during council sessions and so they have requested a slot for the Chairman’s speech.

Sustainability and Replication-The gender committee has resolved that to increase male participation in Gender issues, they should retain a male gender focal person. For the purpose of sustainability, the gender committee believes that there should be a permanent post under S&CD for an individual entrusted with coordinating, monitoring and evaluating gender mainstreaming.