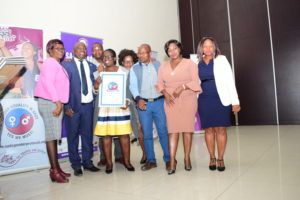 The gender committee has developed a gender policy statement that the management has approved and committed to. The council also has a gender action for 2019/2020 that has also been approved.Women make up 22% of the council’s political wing,16% of the management team and 65% of the council’s overall staff. In terms of non-traditional roles in the council, the Council Chairperson for CDSS and the performance monitoring committee are both women. The council ensures the participation community members in decision making by consulting with VDCs. The VDC membership in the area is made up of 150 persons, where 105 of them are women and the rest are men.The council has carried out gender sensitization workshops for VDCs and has intentionally employed a woman as a the RADS boarding master, a position that is usually occupied by men.

Local Economic Development-The council has 2 market stall areas but only one is operational. In the 2018/2019 financial year 80% of the council’s tenders were awarded to PWDs, youth and women. Furthermore 100% of the tender and quotation value was awarded to women and youth. Through local economic empowerment schemes like the poverty eradication program the council has been able to fund business projects initiated by locals. Some of the projects include the Zuto salt project, Lehututu brick moulding, Lehututu leather ternary, a guest house.

Climate Change and Sustainable Development-In its efforts to contribute towards sustainable development, the council has funded the Zuto salt project, which utilizes solar power to produce salt. The salt is sold to BAMB and animal feeding centres. In 2019 the council erected solar streets lights along the Hukuntsi main road, which are also soon to be erected along the Kang main road. The council also supports recycling projects through funding carried out by locals, one such beneficiary is a lady who makes crafts from paper mâché.

Infrastructure and Social Development-The council has completed 67 RAC and destitute houses. It also recently completed a water project in October 2018, to provide water to some of the district’s rural settlements. The council has an active village health and sanitation committee and it participated in the National Clean-up campaign where the district received an award for being one of the cleanest areas.

Sexual and Reproductive Health, HIV & AIDS-The council’s gender committee works with DHMT to address SRHR issues. The gender committee recently started a donate a pad campaign through which it hopes to donate pads to at least one school per quarter. The district has a youth clinic that caters to youth.

Ending Violence-The gender committee works with S&CD to address issues around ending violence. Together, the two committees have established Village Child Protection Committees in each of the 8 settlements within the district. These committees are aimed at assisting abused children in the various settlements. The Hukuntsi Sub District council furthermore has a District Gender committee that is inclusive of men’s sector.

Gender Management System-The council has a gender committee and they recently developed a gender monitoring and evaluation tool, to monitor progress of the gender action plan.

Resource Allocation-Although the council has no gender specific budget, the council management   has agreed that money from other departments can be used to fund gender related workshops and seminars.

Challenges-One of the committee’s major challenges is that, because there is no gender policy, there is poor participation of staff in gender related activities. The committee has resolved that to deal with this challenge, it will advocate and lobby for a gender mainstreaming strategy in the council.

Lessons Learned and Innovation-The committee believes that gender mainstreaming should be incorporated into employees’ PDPs to ensure accountability.