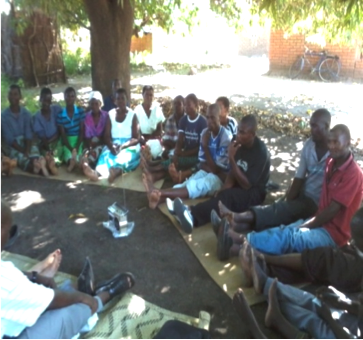 â € œWe have noted how gender is sensitive in education. We thought its women only to prepare food to the on going school children and we thought its culture to see agirl child always busy at household level while a boy is busy getting prepared to school,â € responded one of the Dzimwe listening clubs .

This presentation is showing how gender is sensitive in education and how education can be affected if gender is not recognised at house hold level.

First of all let me describe Dzimwe as a first community radio station in the country ,established with funding from United Nations Education, Scientific, and Cultural Organisation (UNESCO). The radio works to provide a platform to rural communities within its coverage area to facilitate dialogue on development needs and issues. Dzimwe has been running since 1998, and its programming addresses issues such as health, education, safe motherhood, violence against women and girls, sustainable natural resource management and income generating activities related to farming and fishing.The station reaches,Mangochi,Ntcheu and parts of Machinga and Deda district and currently located in Lake Malawi National Park building in Monkey-bay while its 26 rooms new building under construction with expectation of finishing by June,2014.
From the time the radio station struck a partnership with Gender Links in 2007, the community broadcasting institution has been mainstreaming gender in its programmes and projects. Besides developing a gender policy for the media house as one step of the Media Centres of Excellence initiative by Gender Links, Dzimwe is also championing gender at a community level through its 28 radio listening clubs.
The radio has different types of radio listening clubs namely: women, youth, men and hybrid (Mixed). The radio deliberately divided the clubs with an intention to empower women.
We also noted that women were silent on so many issues that were affecting them because they did not believe in themselves. This forced us to divided the clubs so that we could empower women in a special way by giving them a voice

I love this radio station and I like it