Case Studies Mauritius says No to Child Marriage at the CEDAW 7... 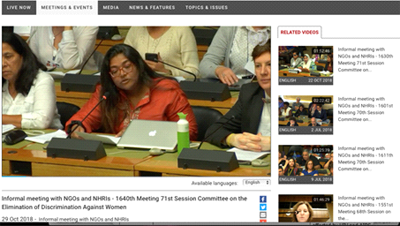 Gender Links (GL) Mauritius and senior advocate from Mauritius participated in the 71st session of the CEDAW committee held at the United Nations in October 2018. This is the first time that a Mauritian non-governmental organisation (NGO) presented a shadow report at the United Nations, CEDAW Committee. The shadow report consisted of the inputs from GL Mauritius, Media Watch Organisation, SOS Femmes and Young Queer Alliance. The shadow reported highlighted Child Marriage which is a major concern in Mauritius.

Click here for the list of reports from the state, from civil service including statements and the concluding observations.

In their statement, the civil society raised the following points on the issue of Muslim religious marriage and child marriages. The amendment of Section 16(4)(c), which provides for an exception to the non-discrimination provision in cases of personal status matters. To date, the legislature has not announced whether it plans to proceed with any constitutional reform, nor has the Muslim Family Council made any recommendation and/or assessment regarding this amendment. The Mauritian State has not codified a comprehensive personal status law, leaving Muslim women in religious marriages without legal recognition or rights.

Religious marriages are not subject to civil marriage laws, and courts do not rule consistently on issues such as custody and survival rights. This legal ambiguity increases inequality and further subordinates Muslim women in Mauritius.

The long-term security that legal rights can provide women much needed protection. This scrutiny holds religious communities accountable to Mauritian values of non-discrimination and freedom to practice religion, and to the Shari’ah values of equality and justice. The Mauritian State must strive to codify a comprehensive personal status law to protect women in Muslim religious marriages.

There is no minimum age for religious marriages, leaving young girls vulnerable to child marriages. The most recent example came to light in June 2018, when a 13-year-old girl, who was married in a religious ceremony to a 19 year old man, died due to health complications while pregnant. Such tragedies cannot be permitted to continue.

The Civil Code allows children ages 16-18 to be married with consent of a parent or a judge. In 2014, there were 805 documented marriages of children aged 15-19 in Mauritius, the majority of whom were girls. Girls suffer disproportionately from child marriage, risking their health and educational opportunities. A clear ban of child marriage for children under the age of 18 is a critical step in protecting children and reducing discrimination against girls in Mauritius.

The State has to leverage its robust framework of diversity and inclusion to:

GL Mauritius organised a round table discussion after CEDAW 71st session where NGOs, embassies, political parties, parliamentarians and ministries were invited to work on an action plan on the concluding observations of the committee. The Action plan was sent to all participants including all ministries and to the prime minister’s office.

The video can be viewed here – video one, video two.