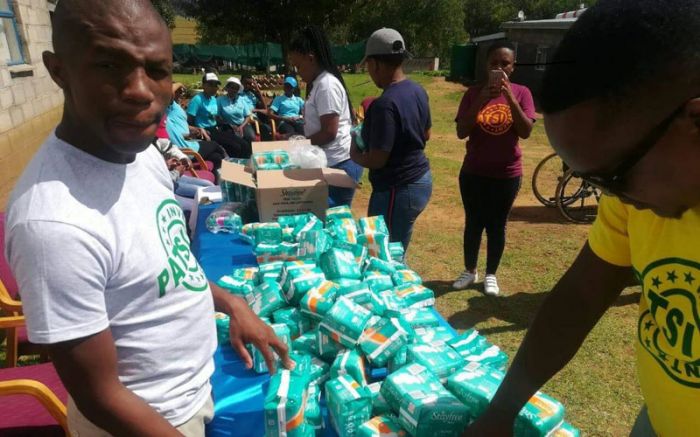 The Kingdom of Lesotho has achieved an important milestone in menstrual health. The government made a bold announcement during the budget speech read by Minister of Finance Dr Moeketsi Majoro on 12 March 2019 in Lesotho parliament that sanitary towels will no longer be charged value added tax (VAT) (Kingdom of Lesotho, 2019). VAT in Lesotho is charged at 15%. As such, the scraping of this tax from sanitary towels means Basotho, especially adolescents will now pay 15% less than what they were used to paying previously.

The World Bank (2012) has reported that at least 500 million women and girls worldwide do not have enough facilities to cater for their needs during their menstruation period. The lack of facilities, particularly in public spaces such as schools and health facilities pose a major health threat to the females.

Moreover, in Lesotho reports indicate that some girls use old clothes such as socks and sheep skin during menstruation(World Vision, 2018). The cases mentioned in the preceding paragraphs are an indication that menstrual health related issues affect women globally and not just in a particular geographical area. It is thus important for countries to ensure that the barriers to access to hygienic menstrual health are eradicated so that the health rights of girls and women are protected at all times.

As mentioned in the previous paragraphs that menstrual health talk has always been taboo for men globally. Lesotho is not an exception in this case. However, these barriers were broken when the Lesotho National Assembly member (Proportional representation member for Alliance of Democrats) Kose Makoa moved a motion that sanitary towels should be given for free to all girls.

The Queen also supports girls.Besides the queen, there are other businessmen that have now taken upon themselves to assist adolescent girls with sanitary towels so that their periods are no longer a frustration. Thabo Morena from Patsi Investment and his colleagues donated sanitary towels to the girls in Mamantso Community Council. Morena indicated that ” We have always been concerned about girls missing school due to lack of pads, and when the Minister announced that there will no longer be tax for this commodities we were very happy as our drive will reach more girls.” He further stated that, “Now that there is no tax on pads, we will buy more pads for less and we will even help girls in other councils.”

Additionally, some schools such as St Stephens High School, are now offering free sanitary towels for girls in need in their school. This project was implemented because the school felt that some girls from disadvantaged backgrounds were missing valuable school time due to their periods. One of the school managers indicated that “Our leaners come from different backgrounds and some cannot afford sanitary towels.” The manager also mentioned that, “Again some of our learners do not know their menstrual cycle and as such their periods start while they are here at school. We cannot afford to send them home to get pads every time they go on period as that wastes a lot of their learning time.

The call for free sanitary towels by members of parliament and the political will of the government has brought positive results in tackling issues affecting menstrual health in Lesotho.’Makhotso Akhosi, a nurse from Lesotho Defence Force Clinic, is content that the many illnesses caused by unhygienic material used during menstruation will be largely reduced and they can use their budget for other things.

Queen Masenate Mohato Bereng Seeiso through her Hlokomela Banana Foundation distributes sanitary towels to orphaned and vulnerable girls. Most of these girls being assisted by the queen’s foundation live in remote and hard to reach areas of the country.

Additionally, business men also feel that menstrual health issues are not restricted to females, as such they believe that they also have a role to play. That is why they have embarked on distributing sanitary towels among disadvantaged girls.

As it stands, with effect from the new financial year that started on 1 April, 2019 there will no longer be any tax charged on sanitary wear in Lesotho. However, a lot still needs to be done as removing tax alone is not sufficient. There are girls and women who still cannot afford the sanitary towels despite the removal of tax. As such, the government and civil society still need to come up with strategies that will ensure that the disadvantaged women have access to free sanitary towels that will be availed at convenient places.

Moreover, there is need for NGOs to start looking into venturing into joining Her Majesty the Queen in promoting menstrual health rights particularly in the rural areas where information and services are lacking. It is also upon the government through utilising the councils to ensure that they disseminate relevant information and services to people in remote areas.

Menstrual health is a component of Sexual and Reproductive Health Rights. It is the mission of the Ministry of Health and other relevant stakeholders such as development partners, civil society and NGOs that SRHR related issues are addressed for Lesotho to have a healthy people. Thus it is very important that Lesotho seems to be taking necessary steps in addressing barriers to effective SRHR implementation. The removal of VAT from sanitary towels is one important gesture that will have a very positive impact on SRHR in Lesotho. This means that more girls and women will have access to materials and periods will stop being a humiliation to them.