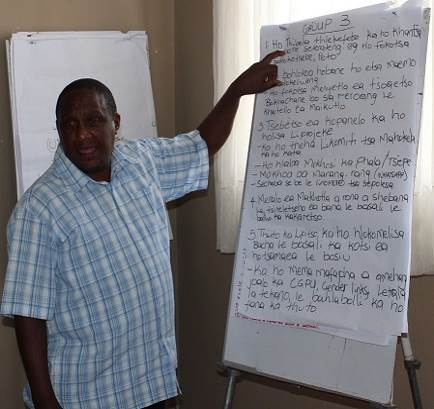 “Our girls’ future, health and safe life is in our hands and knowledge is power,” says Councilor Mohlomi Setlaba. He want councils to work together with traditional and community leaders for to campaign for safe abortion.

Mohlomi Setlaba is a councillor at Mamants’o council and a member of social services committee. Cllr Mohlomi believes in his culture and tradition, and respects them so much that he does not tolerate people talking negatively about them. He is a very strong leader in his community and likes to encourage people to work together to do business and in community groups.

In 2018 Cllr Mohlomi participated in a SRHR training and action planning workshop in Maseru with councilors from ten councils. Safe abortion was a key focus area in the workshop. Cllr Mohlomi was the first person in the meeting to support safe abortion and highlighted how important it is for girls to know and understand their options.

He thanked Gender Links for equipping him with necessary information, change his perception and increase his knowledge on abortion. After the meeting he held public gatherings in his village where he talked to teenage girls about safe abortion and tried to gather as much evidence to support the legalisation of abortion in Lesotho.

He organised a big public gathering during the 16 days of activism campaign and the theme for that day was “Safe abortion”. Both young boys and girls had a short drama where they portrayed why young girls do unsafe abortions. The key reasons were rape, age and being impregnated by older men who took advantage of their vulnerability.

He has promised to work hard and encourage all councilors in his council to get involved and campaign for safe abortion so that the community knows and understand how important it is for young girls to have choices when are pregnant. Cllr Mohlomi promised to do whatever it takes to improve their service delivery at the council and to work together with nearest clinics so that health services are accessible to all young girls with lots of choices.

One thought on “Lesotho: Male councillor campaigns for safe abortion”

I agree with Mr Setlaba that abortion should be legal. I mean we are losing a lot of girls who are very young and that is very sad. This should really be taken in consideration.