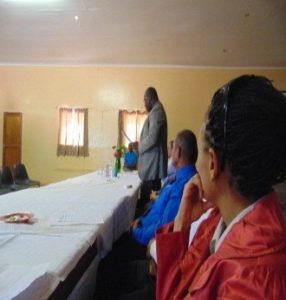 roab Village Council is situated 172 kilometers south of Keetmanshoop in the Karas Region. It is one of Gender Link’s seven Centres’ of Excellence (COEs) for Gender Mainstreaming in Namibia, and has completed all stages of the COE process. In 2012, the Aroab Village council participated in the first National Gender Summit and won the Award of COE for Local Government.

The council has crafted a number of gender policies to guide its work. Those are the gender policy, action plan, HIV/AIDS policy, safety policy, personnel rules and regulations on keeping of animals in municipal area. The council is in process to establish its own food bank, in attempt to better the current poverty situation in Aroab. There are three male councillors and two female councillors in Aroab. To add, the council has a newly elected gender champion, Cllr Vilander.

Aroab Council has four committees and all these committees are chaired by women. Women in this council are given an opportunity to lead and their opinions matter. Their participation is not taken lightly.

Women play a major role in participating in the council’s meetings. About 26%-50% women participate in public consultations. However, the council meetings are being attended by everyone regarding any challenges or any condition. In that case, women facilitate the meetings.

The council’s total workforce include 41% men, 31% women and 28% youth. A total number of five women form part of the council’s top management positions. Some of these women are engineers and managers. Men in this council are slowly becoming gender sensitive. They know that women also have rights to own properties, as well as occupying high position.

The council has provisions for maternity leave, but none for paternity leave. A pregnant female can take up to three months at home after giving birth. The council also provides flexi time by which employees are allowed to take a day off in case of emergencies. Sexual harassment cases are covered in the personnel rules and taken care of as the rest of any other offence by going through the whole disciplinary process.

Aroab Council allocates a substantial budget to gender-related projects from 2015 and 2016.

Council avails market stalls to women and men in an attempt to sustain them financially. Currently three women are in operation at the market stalls and five women are operating business from their homes. The village council previously had a big challenge of informal settlements and unemployment. With very little economic activity, the council was left to provide for almost all residents, and at the same time sustain itself. Therefore these small businesses were initiated to create opportunities for people to sustain themselves.

The council is involved in family planning, which includes involvement by women, men, PWD, and youth. The council held its own World Aids programme with HIV/AIDS related drama, to showcase the effects of Aids and the importance of knowing your status. Men and women have equal access to the treatment and men and female condoms are distributed equally to the public.