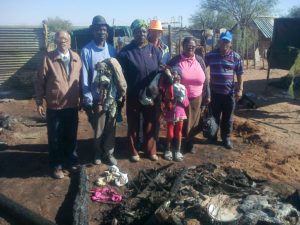 Maltahohe is a village in southern central Namibia close to the Swartrand escarpment. It has about 6,000 people within its population and owns 17,000 hectares of land.

As part of gender related policies, the local capacities of women and women’s organisations, as well as other actors at grassroots level, are being supported to enable effective gender-based violence prevention and response in times of crisis. The council has three male councillors and two female councillors. The Deputy Mayor in the council is a female.

Maltahohe Village Council has three committees, two of which are chaired by women. There is no Junior Council and thus the council is working to increase the number of young men and women involved in the projects that are held by the council.

Women, people with disabilities (PWD) and youth actively participate in the council work. They participate in decision making. Between 76% and 100% women participate in the public consultations. The council is currently organizing a clean-up campaign which will being held through the wellness program. The campaign mostly consists of women and children volunteers, and the council also gives out small tenders of cleaning up the town, parks and the graveyards. The first preference is given to women and the youth.

The council has employed a total workforce of 42% men, 38% women, 16% youth and 4% PWD. The council has two females in the management. The artisan plumber and acting Chief Executive Officer (CEO) of the council are both women. One of the ways of improving Maltahohes competitiveness is to obtain better balance between women and men in economic decision-making positions and that is what the council is currently working to improve.

There are provisions for maternal leave but none for paternal leave. Women who are due for maternity leave are permitted to stay at home for the period of three months. There is a policy against sexual harassment. However, there has not been any sexual harassment case reported. There are suitable facilities that cater for people with disabilities within the council, for instance, there are toilets suitable for PWD.

Maltahohe Village Council has allocated budget to mainstream gender-related projects from 2015 and 2016.

As part of the local economic development plan, the Council has a Small and Medium Enterprise (SME) Park which consists of 10 stalls, nine of the stalls are occupied by women and one by a man. Council together is currently constructing bigger and better SME facilities which most of the stalls will also be allocated to women and the youth. This will not only assist people from gaining basic income, but it will also boost the country’s economy.

The economic and social impact of climate change on the communities of Maltahohe cannot be understated. Maltahohe is leading the fight against climate change, taking decisive action on transport emissions, urban biodiversity, urban regeneration and waste management. In this council the success of programmes such as the Cleanup campaigns and gardening, farming include women, men and youth.

Im ever aplying posts at this village council.but i never get any respond.though i reach the requirements