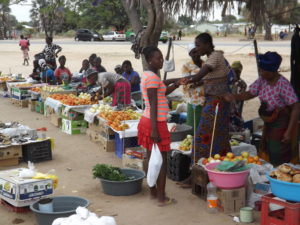 The Nkurenkuru Town Council, since its inception and proclamation as a town in September 2006, has been dominated by men in its most administrative and most non-administrative structures.

The Council is aware of the SDGs and is working towards achieving some of them within its mandate as stipulated for in the Local Authority Act of 1992 as amended. Hunger eradication, and employment creation, gender equality to access resources of the council, infrastructural development, including sustainable consumption to mention a few are topped the Council 2015/16 effort by lobbying for investment that created employment in town and availing of land for urban food production along the Kavango River. There are seven councillors of which four are males and three are females.

Women, PWD and youth above actively participate in the council work. Between 51% and 75% women participate in public consultations. Nkurenkuru Town Council has availed a platform by which women are empowered to freely speak, contribute and chair respective meetings. The Council has outsourced its entire two refuse removal contracts to female entrepreneurs in town and this alone is evidence enough to show how committed this Council is towards a society free of sexism and other forms of discrimination.

Currently the council has a total workforce of about 28 permanent staff members of which only 36 per cent are women. The total number of women in the management is three. The Heads of Departments for sewer, HR, and Finance are all occupied by women considering the structure of the council. The council has also appointed a female to act on the Manager’s position for Technical department for a year since January 2016.

Nkurenkuru Town Council had allocated budget to support gender-related projects in 2015 but none for 2016.

As part of the council’s local economic development plan, the council is planning to relocate vendors from the old open market which has around 20 stalls. The vendors will be relocated into the newly planned 120 stalls open market which is even safe, conducive and healthy for vendors to trade their activities in. These stalls will be open to every vendor in the council to use and be able to make some money for themselves.

The local economic development policy strategy 2015 of the Council identified some mitigating factors regarding climate change adaption strategies. This has led to the development of a feasibility study regarding renewable energy options for Nkurenkuru Town Council and this council has made a call with the European Union regarding funding for this project.