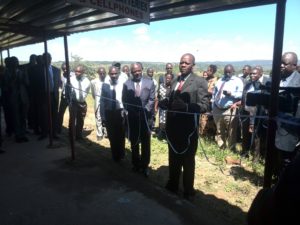 Situated in Mashonaland East, Goromonzi RDC is regarded as one of the best Rural District Councils in the country.

There is a gender policy recently reviewed the gender action plan and it was adopted in the Full Council minutes of October 2016. The council has 25 councillors, in which 21 are male and only four are female. The Deputy of the mayor is a female.

The council has seven committees, and women chair two of those. The gender champion is the driver of change in the district and she advocates for the gender agenda in the district. Between 51 and 75 percent women participate in the public consultations.

The council provides three months for both maternity and paternity leave.  There is a policy against sexual harassment. Such cases are dealt with as per conditions of services, and the Human resources and Administration officer is responsible for such but so far there is no such report that has been lodged for the past years.

The council has allocated budget to support gender-related projects.