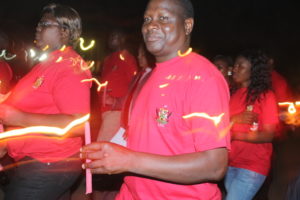 Lusaka is the capital and largest city of Zambia. It is one of the fastest developing cities in southern Africa. Lusaka is in the southern part of the central plateau at an elevation of about 1,279 metres. Lusaka is the centre of both commerce and government in Zambia and connects to the country’s four main highways heading north, south, east and west.

The action plan within the council is available and also the draft of the gender policy. The council has thirty-four councillors. There are twenty-eight male councillors, and six of them are female. The council’s mayor is a man.

The council has ten committees. There is only one committee that is chaired by a woman. There are more men than women in the council, and there is a Junior Council. Within the junior council, there is an equal number of young men and young women.

Young people, people with disabilities and community members participate in community-based planning projects and meetings. Former councillor, Maggie, initiated the funeral scheme in Chilenje with the Madison insurance. This has helped the community members to fund funerals especially women. Management was also trained in gender and HIV/AIDS issues. Youth has also participated in projects planned during youth days.

Of the total workforce, the council has employed 23% women, 35% youth and 42% men. There are 51 women in the council’s management. After Lusaka city council became a centre of excellence, women have been employed in positions such as drivers, engineers and also awarding contracts to women related to do with waste management and Community Development Fund projects.

Lusaka District has allocated funds from 2015 and 2016 to support gender-related projects.

As part of the economic development plan, the council through the constituency development fund has supported women in entrepreneurship skills. One of the gender-based survivors was given a shop. The council also supports women’s groups through CDF. A group headed by a woman with disability (blind) was supported and they have managed to grow capital for self-sustenance.

The council through the district planning unit has worked with government by empowering men, women and people with disabilities through the citizen economic fund. The council has also worked with Gender Links to train gender-based survivors in entrepreneurship. One of the people who is doing very well has managed to grow her capital to K4000.