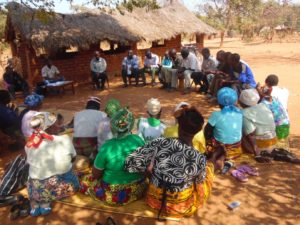 The Nyimba District is a district of Zambia, located in the Eastern Province. The capital lies at Nyimba. As of the 2010 Zambian Census, the district currently has a population of 99,159 people.

Young people, people with disabilities and community members participate in community-based planning projects and meetings. Between 26 and 5 percent, women participate in public consultations. These include public campaigns on waste management, for instance ‘keep Nyimba clean campaign.’

The council has employed 15% women, 39% men and 46% youth. The management has a total of six women. The Deputy Treasurer is a woman. The council encourages its staff to further their studies in non-traditional areas. The council has, so far, only one male officer in the finance department.

Nyimba Council has allocated a budget to support gender-related projects from 2015 and 2016.

As part of the of the Council’s local economic development plan, it provides 90 stands for women, 50 stands for men and also 50 stands for young people to use as their market stalls. In this manner, the Nyimba residents will gain income and entrepreneurship skills, while also contributing to the council’s GDP (gross domestic product).

The council has drafted a climate change policy. Seeing that the climate keeps changing, the council works with women, youth and people living with disability in waste management to try and keep the council clean and also mitigate the causes of climate change.