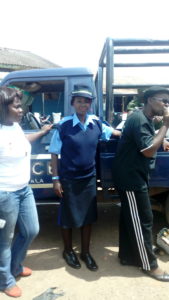 Sensitization is a good practice in the sense that Zambia Police Victim Support Unit officers are being involved in the sensitization campaign. The Victim Support Unit strongly fights for the rights of the voiceless and the victims of gender-based violence (GBV), by ensuring that the victims themselves even know that they are not neglected but protected. It is a good practice because it motivates and empowers the victim of Gender based violence with information. Other than that the Unit also gives advice and guidance to the community so that they become aware of their rights on the issues of GBV in reference to when, why, where and what to report. By doing so it gives a warning to those who want to indulge in illegal activities.

Sensitization was done through sports, drama and poetry. By doing this, information was disseminated so easily to the community. Door to door Sensitization campaign programmes helped to disseminate information to reach every household. Formation of various Women clubs also helped to enlighten members of the clubs and the community on what steps and measures to undertake when found in the case of GBV. Advocating to having more women in decision-making position through campaigns was among activities undertaken.

The Unit was set out to empower the community as people had no information about Gender Based Violence and had little or no knowledge on the violation of their rights. Sensitisation campaigns are carried out through different steps and activities such as drama, poetry and sports which enable information to reach every household in the community. Foster during a sensitization campaign on GBV at Town Market in Chingola.

Women have been empowered as a result of Sensitization programme and through presidential women empowerment. Women have been forming some clubs in which women are getting some small loans from the government.

There are no beneficiaries, yet and the Zambian Government has not allocated any budget to this project. This has been one of the main challenges that has been faced while doing this project. Some of other challenges include lack of transport to respond quickly to reported cases, inadequate funding to enhance continuity of community sensitization, premature withdraw of cases by victims of GBV, lack of cooperation from witness to testify against GBV cases in when prosecuting such, and inadequate visual aids to be used when conducting sensitization campaigns.

Mrs Catherine Mulenga of SNDP reported the case of Assault (OABH) in which Kelvin Mulenga, her husband, had beaten her. She was quoted saying “He would often kick me. I, then since, encounter endless headaches, swollen face and I have a cut on my forehead. I was relieved to see my husband being prosecuted for what he did to me. I was taken to socio-welfare and I was given money to start-up my business.”

Men have become more supportive in reducing gender based violence. This was first demonstrated by Kelvin Hamusenga who is the community crime prevention unit chairman of Kawama, the man who exercised his citizen arrest when he apprehended the 67 year old defiler who defiled the three children in Kawama area along the Chingola solwezi road. That was as a result of our victim support unit police officers who trained the community crime prevention unity officers on offences that deal with gender based violence. Mostly women avoid being members of this unity due to reasons known to them. Mr. Kelvin Hamusenga thanked the office victim support unit for educating his community crime prevention unit and the community in his area on issues and offences that deal with gender based violence. In his own words he said, translated as,” offices thank you very much for the education and sensitization that you imparted in me and the community in kawama area.

The community members in Kawama area are very grateful also for the sensitization that he did there. People now know that committing gender based violence offences means they can be arrested and prosecuted by the courts of law.

This network/organisation has achieved so many results such as stakeholders in the community are equally involved in the fighting the scourge. There has been a creation of one stop centre to avoid too many procedures when accessing justice. Women’s groups have been formed through local focal networks; thereby creating the voice for the voiceless and gender mainstreaming in the fight against GBV. The organisation has also carried out massive sensitisation campaigns in the community.