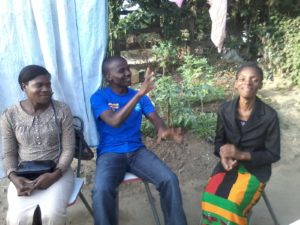 Communication is key to development in any society. It is a common scenario that there is always language or communication barrier between the general population and the deaf. Many times when there is an issue involving deaf women, especially cases of Gender Based Violence communication becomes a big challenge. Even among family members where a deaf woman lives, treatment towards her is not good due to lack of communication. The training of women and families in sign language has tremendously helped to lessen the barrier, and has even helped us fight gender based violence. This project is very important for it has yielded positive results in the community of Luanshya district.

The project aims to engage people to join Sign language Training empowerment. It has targeted to train 50 women, youth (including family members of deaf women) in sign language in order to remove the communication barrier. Secondly, Work-Place Sign language Training Empowerment by which the project targeted to train workers form the Council, Police, Banks, Judicial, Social warfare, in sign language as a way of eliminating communication barrier with the deaf members of the community, as well as to promote conducive working environment for the deaf people.

In relation to the monitoring and evaluation framework, the project has received about seven gender based violence cases in its office and about four cases have being helped through the one stop centre to handle these GBV cases. The project alliance together with victim support unit have handled about three cases of GBV. These cases are handled with professionalism and an open mentality that they are sensitive to the victims.

The main challenges include the fact that the project has not received funding from any source up to this time. This has been a big problem for it has made the running of the project not to move smoothly as planned. The project needed finances on almost all activities in order to produce positive results to our planned objectives. It is a common belief in Zambia that having a deaf child is a misfortune or a curse. This has resulted in some family members to reject the deaf children. The community at large also do not easily accept and accommodate the deaf children. There have been cases where some men have divorced their wives for bearing them a deaf child. Some have opted to have extra marital affairs with hopes that the other women might bear then normal children.

Through the same training of sign language, women have greatly benefited. This is because at most gender based violence affect women, especially the deaf. However through this program women are able to communicate in sign language to the marginalized deaf girls. Some women have been empowered by being taught to use sign language, including teaching the community on how to communicate with the deaf. Some women have been empowered by being given jobs as interpreters at respective companies.

Mrs L. Sakala says “I would like to thank ZBIL Mr P.Sinkamba who really helped me through my daughter’s education Cecilia Sakala. As the family we did not have any financial support to take of my child to school due to her disabilities. My child is deaf but ZBIL came in and took my daughter (Chileshe Chepela) to school and they were paying all her school fees until she completed her secondary education last year. We are looking forward to take her to university. I ask the almighty God to bless ZBIL (Percos Sinkamba) to continue empowering people with disabilities.”

The government now has sign language interpreters and that makes it easy for the Luanshya authorities to be able to deal with cases of GBV, especially if a case has been reported by a deaf person. Since the project began, the community has a positive attitude towards deaf people. They now know and understand that a deaf person is also a Human being like everybody and they are able to do everything that a hearing person can do. They now believe that deaf people are more united than hearing and talking people and they can do more than then the other.

One thought on “ZAMBIA – ZAMBIAN BRIDGE TO INCLUSIVE LIVING”

Hi. I have a deaf child. My son is already enrolled in a deaf school.
The challenge im having now is communicating with him. He now knows sign language but us as family members we are still lagging behnd.

Could you help me with where i can also learn sign language,especially in Luanshya Zambia.
Will really appreciate your help.