There was a rural school with disadvantaged children who travelled for long distances to access secondary education. Some of the school children were lodging at Mubaira growth point. They ended up in difficult situations like drug abuse, alcoholism, prostitution and child pregnancies. The council, as the responsible authority of the school, mobilized resources from parents and donors to construct a boarding facility for the girl child.

The main objective of the project intention was to protect the girl child so that she accessed education in a conducive environment. An environment that would be free from sexual and drug abuse, alcoholism and prostitution. A provision of suitable living and academic conditions for school children especially the girl child. In achieving the above, community participation had to be taken into consideration. Lots of consultations were done with relevant authorities who included the Ministry of Primary and Secondary Education, Ministry of Health and Child Care among other authorities. Then the planning stages and sensitisation of the concerned parties followed.

Consultations were done to map the way forward in regard with the problem at hand. Some meetings were convened at different levels by different stakeholders and concerned parties. The use of suggestion boxes was done and sub committees were chosen. The committees included some gender and social experts from various platforms and organizations. A call for adhering to policy and procedure was made. The sub committees would regularly give feedbacks to stakeholders which included the Mubaira community. The school’s daily attendance register, pass rate and frequency of pregnancies and school dropouts were all taken into account.

At first the community and even the concerned parents were reluctant to contribute towards the project. However, 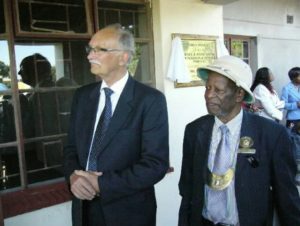 continuous engagements of the community and the parents were done through their community leaders. Opening of the hostel took time because of the several conditions brought forward by the parent ministry (Ministry of Primary and Secondary Education). The ministry insisted on the construction of a matrons’ house which had not been prioritised at first. Such bureaucratic procedures delayed the opening. The construction of the hostel was financed by the parents. If community members were engaged in projects they would contribute positively as they felt to be the real owners of the projects. Community leadership was very useful in mobilization and acceptance of projects.

Parents should pay their school fees for daily operations and maintenance of the facility. Communities should have a role to play in the affairs of institutions in their respective communities. There should be communal representatives be they men, women, people with disabilities and even faith based organizations in the running of projects in communities. Continuous awareness on issues to do with GBV and empowerment of the girl child should be a priority. School inspections and technical assistance from various government departments such as the Ministry of Primary and Secondary Education and the Ministry of Health and Child Care should not be ignored.